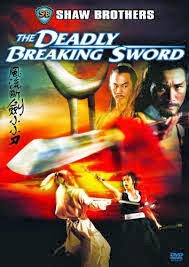 I was excited for The Deadly Breaking Sword. An epic concept with the two leads (Ti Lung and Fu Sheng) who showed so much on screen chemistry in Avenging Eagle just the year previously? Unfortunately, the combined powers that be of a great Shaw Brothers cast and some strong direction from Chung Sun cannot save a film that seems to have a massive focus problem and some terrible ideas in motion. The Deadly Breaking Sword has some solid moments, but overall it comes off as simply disappointing.

A legendary swordsman (Ti Lung) known as the Breaking Sword - for leaving an inch of steel from his sword in each of his winning duels - finds himself at an odd place in a small town when a world renowned prostitute arrives in town and requests his presence. With the help of a money hungry gambler (Fu Sheng), he will have to solve a mystery years in the making and battle his greatest foe.

I am definitely torn about how I feel about The Deadly Breaking Sword. On one hand it presents a semi-solid mystery wuxia style film with some pretty well directed martial arts battles in it. The opening of the film is slathered in awesome atmosphere with a great (and cheesy) introduction to Ti Lung as the Breaking Sword. Yet from there the film starts to meander around. Director Chung Sun does what he can to add a lot of visual fun to the film and it works at times. The final battle has some great use of depth and camera placement to make the rather mundane sword fight a bit more fun, which is a lifesaver in many instances.

The Deadly Breaking Sword suffers from a lack of focus at times and occasionally comes off as a parody of wuxia than an actual wuxia. Fu Sheng, while occasionally owning as the money hungry gambler, is only in the film for comedic relief and pops up when the story gets too heavy or its convenient for the plot. While his obvious slap stick Jackie Chan routine does work once in a while, including a rather fun introduction in the gambling house, it tires quickly because of his one tone character. This is the issue with most of the film. It starts off atmospheric and serious, jumps to slap stick comedy, comes back to a mystery film, then leaps off again as a swashbuckling wuxia. It’s scattered. Half of the time I forgot to even be looking for clues of the mystery as it didn’t feel as it was important half the time.

The film also throws in a weird almost fantasy element into the third act when one of the villains from the first act reappears as a “super villain” (complete with dyed hair and unstoppable strength). Now far be it for me to say it wasn’t fun to watch Ti Lung and Fu Sheng team up to defeat this Super Halberd fighter, particularly with the strong camera work, but it’s also out of the blue and rather random and further goes into my complaint that the film is simply too ‘scattered.’

All in all, The Deadly Breaking Sword is a fun movie but not much more than that. While I am still perplexed by the massive amount of praise it seems to generate from fans, it does have some highlights in creative camera work and some fun sequences. Outside of that, it might be one of my least favorite Ti Lung films (as he seems to almost parody himself at times) and it just comes off too disjointed to work fully.