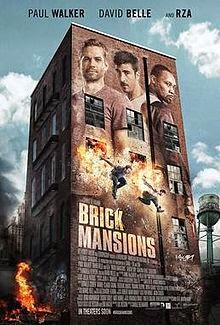 As a person that identifies with the 'vulgar auteur' movement as something awesome, the original District 13 (as District B13 as it is known in the US) was always a personal favorite. Luc Besson crafted, semi-modern in visual style, and blasted full of martial arts, parkour, and 80s style ridiculous cheese. Naturally I was somewhat stoked for the US remake, Brick Mansions. Yeah, it looked exactly like the original film plot wise from the trailer but there was room for improvement and I have always secretly wanted David Belle to gain some momentum as an action star. What I should have expected was what I got from this remake: a film that desperately wants to be the same, but utterly fails at improving on anything from the original and losing the two ingredients to making it work - charm and fun action.

For Damien (Walker), the chance to finally go undercover to catch the notorious crime lord Tremaine (RZA) in the walled off section of Detroit called Brick Mansions was the chance he needed to avenge the loss of his father. Unfortunately, the bomb that is set to go off in the rough part of the city is going to make it a fast run. With the help of a convict Lino (Belle), who knows Brick Mansions and has an ex-girlfriend held hostage by Tremaine, the two will have to team up and burn through slums to make sure nothing blows up...or die trying.


As a fan of District 13 and underground action films, I have a slew of reasons to be pissed about Brick Mansions. And yes, you are going to get more of a rant than a review with this one so I'm going to start off with some of the things I enjoyed about this re-telling of the French actioner. Firstly, Paul Walker has just enough charm to pull off some of the terrible dialogue he's fed. While he is certainly not the physical presence of Cyril Raffaelli from the original, he carries a lot of screen presence here. Perhaps it's the fact that knowing it's his last full film holds a bit of weight, but he seems to be a natural fit for films of this nature. Also, the film is still fun. While it never effectively matches the charm of the original in any portion, for those who haven't seen District 13 it will be fun to see all of the stunts and action (particularly David Belle's escape in the opening sequence.)

From there the film is simply one massive disappointment. Firstly, the film is almost exactly the same and only changes a few aspects to the story to drive it in a few new directions including an approach with RZA's villain in the third act that feels out of the blue and forced. So naturally, it failed to be anything new to really latch onto. Secondly, the film obviously tries to play to Paul Walker's fan base with a few new driving sequences...that really fail to be much more than just seeing him attempt banter with Belle and failing to do so with some of the horrible dialogue that the film has (and some weird choppiness from Belle being very obviously dubbed to lessen his French accent). And lastly...

...director Camille Delamarre now ranks up there with Oliver Megaton as one of my most hated modern action directors. Had I known he was the editor for Megaton on the sloppily put together films Taken 2, Transporter 3, and Columbiana then I might not have gone to see this film at all. The same faults that haunted those films continue to plague Brick Mansions here. The editing is the quick cut/shaky cam/quick zoom bullshit that has ruined a lot of action films in recent years. So when it comes to seeing David Belle do his parkour stunts (which can still be impressive considering he's now 40) you actually don't see shit. Just lots of fake kinetic energy that any self loving action fan will loathe.


When the credits on Brick Mansions rolled, I was fairly pissed off and disenfranchised. Perhaps the youth of today might find some fun to be had in this film, as there was some charming moments here and there, but as an action film fan and someone who loved the original District 13 this film was completely off the mark. The direction was terrible, the action redundant, and the changes made little to no sense. Take a bit of advice, see the original and skip this one.