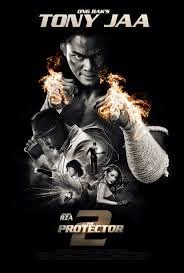 The career of Tony Jaa has been something of a roller coaster ride from the promising beginnings of Ong Bak and The Protector. Through the trials of his disappearance and the general clustering of Ong Bak 2 and 3, the guy really needed to put himself back on top. Yet the Thai action star can’t seem to get a break even now. His ‘return’ was supposed to be the epic sequel to the film that garnered him international fame in The Protector 2 (or Tom Yung Gong 2 for international audiences). More problems plagued the production of this film and the results for The Protector 2 are mixed. On one hand, it showcases some new elements for Jaa and on the other hand it’s a mess in narration with some ill-fitting attempts at being ‘cutting edge.’ It’s a film that’s sure to disappoint fans of the original.

Kham (Jaa) is trying to live a peaceful life in the Thai countryside with his elephant. That is until some questionable parties decide to kidnap is fucking elephant again. This time it’s the vicious gun smuggler Mr. LC (RZA) that seems to have plans for both Kham and his elephant.

If one man single handedly takes down a criminal syndicate in Australia in an attempt to save his kidnapped elephant then I don’t care how arrogant you are with your fighters and your schemes, but you don’t kidnap his fucking elephant again. I mean, the entire premise of this film seems half thought through and stitched together with some very weak plot progressions. Even with RZA’s best performance to date (it still isn’t good, but that’s because he was terrible in so many films previously) and some fun secondary characters, the entire idea for The Protector 2 is a stretch and it doesn’t flow.


Yet, let’s be honest, The Protector had a terrible story too. I don’t watch Thai action flicks for deep stories and thoughtful character development. I know this and went into The Protector 2 with this mindset that made the story less of a hurtful element then for most film buffs. I watch these films for the ridiculous action set pieces and heart felt execution. Even here The Protector 2 seems to be a bit of a miss. While there is plenty of hand-to-hand combat to be had here, the focus of this sequel tends to be more gimmick and stunt oriented and the results are mixed. Seeing Jaa tied to a bridge and go swinging through the air is fun, but it’s not jaw dropping and while the idea of shooting a motorcycle straight up into the air through the roof of a shack and having Jaa elbow the rider at the peak of their leap might sound awesome, the weird green screen effects tend to lessen the impact of such moments. A vicious fight with walls of fire looks great on paper and comes off as a bit awkward here.

When the film does go back to what worked in the first one, it’s a breath of fresh air. The hand-to-hand combat, while not quite as good as the first, is still pretty impressive. Jaa is his usual badass self for the film and the addition of Jeeja Yanin as one of the secondary characters adds a bit of spice for martial arts fans. Once again (like all of her films) she sort of gets the shaft by being given a terrible character with little arc and less impact as she sort of shows up randomly to help/hinder our hero and that is disappointing too.

If there is any truly great aspect about The Protector 2 it’s Marrese Crump. While the man has only one other film credit (outside of being a stunt double for RZA in The Man with the Iron Fists) and almost no lines of dialogue in this film, he simply owns every scene. He has that brilliant action star thing known as screen presence and watching his fights with Tony Jaa single handedly made The Protector 2 worth the rental. He’s an action star in the making and his limited, but shining role here indicates that potential.

For action fans, The Protector 2 is a disappointment overall. The gimmicks don’t work like they should, Jeeja is underused (again), and the narrative is jumbled. It does have its moments of fun and Marrese Crump as the big surprise of the year, but moments do not make a good movie. Here’s to hoping that Jaa role in the upcoming Fast & Furious 7 will be a launching pad for a new era of his career outside of the mess.