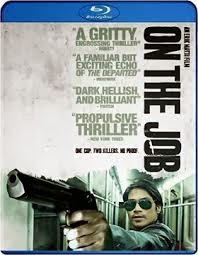 While South Korea seems to have the thriller market cornered with unrelenting and emotionally driven films, I have to say that if the Filipino film industry can start making more films like On the Job then South Korea has some competition on their hands. While occasionally the film seems like it might have too much going on at one time, the resulting almost chaotic atmosphere and dark streaks of character study make for a film experience that any fan of ‘heavy’ cinema should partake in and one that leaves a mark for long after the credits roll.

The term ‘thriller’ might be a rather generic one that gets thrown around far too often in films that remotely has a sense of suspense to them, On the Job is the kind of film that really embraces the term without ever cascading itself into the action or horror film territories. When a young up and coming cop has to navigate some treacherous territory of corruption and politics to investigate a series of murders, he stumbles onto a hitman and his apprentice with nothing to lose.

The concept is fairly simple at the core resembles some classic thriller films like Infernal Affairs or Eastern Promises in many ways in particular with its focus on the characters involved in some complex situations of gray moral areas. This is where On the Job succeeds in spades as it builds a plethora of very relatable characters that, while they do questionable acts, we understand the hard choices they are given and want them to fix the wrongs of their life. Acted with substantial force and vigor, the cast embraces their chances to fill these characters with realistic subtlety that details their often larger growth. While many play fairly recognizable parts (the older hitman with experience and guilt and his young idealistic protégé for example), they do it with enough power and refreshing honesty that rarely did I find myself feeling the cliché moments that do occasionally pop up.

The plot itself can be a bit muddled for viewers on the first viewing as On the Job rarely slows its roll with its expansive characters and twisting duel stories, but on my second viewing on found it to be an additional element to the rather intense atmosphere that director/writer Erik Matti crafts with his stark dire visuals and dire circumstances that our characters exist in. The violence might be fairly minimal for a film of this kind, but when it appears its brutal and emotionally effective for the sake of story too. The narrative only adds that artistic merit that too many thrillers abandon for the sake of exciting moments or a consumable product and while at first I was hesitant to praise, comes off as perhaps the best part of On the Job with repeated viewings.

For the love of film though, don’t assume that On the Job is the action or horror film that too many thrillers cater themselves to for the sake of earning a larger audience. It’s a thriller that’s much more substantial than that with its deep gray areas of plot progression and strong balanced characters that have to navigate through the fog of their situations. Truthfully, it’s a film that’s dark, understandable, brutal, and often too true in it’s depiction of the complexities of the human condition…and it earns every bit of praise it receives for being the kind of film that leaves a mark after viewing.

Comes with the highest of recommendations.