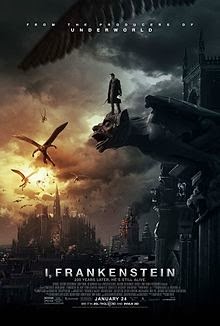 I, Frankenstein has to be some kind of miracle. Not the kind of miracle that you are thinking of, but it’s a miracle in the sense that someone out there in Hollywoodland read that script and thought to themselves “Let’s dump $65 million into this, it should be awesome!” Now that, my friends, is a fucking miracle. Even as a finished product, I, Frankenstein is something of a catastrophe on film. The worst kinds of dialogue. The worst acting from decent actors. The worst plot in the last five years. While this does lend itself to be unintentionally hilarious, I’m sure the audience around my sister and myself thought we were the biggest assholes for laughing the entire time, as a cinephile it’s hard to even justify most of what was seen on the screen.

After hundreds of years of wandering, Frankenstein’s monster (Eckhart) finds himself in the middle of a vicious war between demons and Earth’s protectors, the gargoyles. The demons desperately want the secret to immortal life for the dead and the gargoyles know they can’t win the war against an army of the undead. With the help of a random doctor (Strahovski) the newly named Adam must decide whether or not mankind is worth saving and if he can even do it.

If there is anything that I have to give to I, Frankenstein it’s that the film takes itself very seriously. All the way down to a fault. The plot itself is so ridiculous that it’s hard to think that they could have ever taken it seriously and with the strong cast that they have, it’s somewhat unbelievable to hear them spouting off the terrible lines of dialogue. Hearing the ever-charming Bill Nighy desperately trying to work his way through being a demon villain ranting about Victor Frankenstein or Aaron Eckhart scowl his way through being one of the most remarkably flat heroes of the last ten years is cringe worthy, particularly when you consider the talented actors that both are. Give them a plot that is as serious as it is nonsensical then you simply have a recipe for disaster.

Yet, I’ve seen plenty of ridiculously bad movies that were are least enjoyable due to style, action, and/or charm. Luckily, I, Frankenstein at least has some visual fun up its sleeve, but that’s about it. Director Beattie, in his sophomore directorial effort, has a knack for some strong fun visuals, but too often the mass amount of things going on in the action sequences blurs together in a mess of CGI. There are some rather cool moments (the bright orange burning of demons sent to hell versus the beams of blue light as gargoyles go to heaven seems cliché, but it works more often than not) and while some of the action might have you scratching your head – including an epic leaping punch to the top of a gargoyle’s head – it’s mostly entertaining in a bad sort of way.

While I have to say that I, Frankenstein is a ridiculous train wreck of a film, I do admit in a very unintentional and humorous way it was a blast to watch. It’s not good. Oh God, it’s far from good, but for those with the right sense of humor it’s probably worth the watch. Probably. Maybe. Okay, really it’s still fucking awful, but it’s better to laugh than cry at the movie theater.

Written By Matt Reifschneider
Posted by DarkReif at 11:15 AM