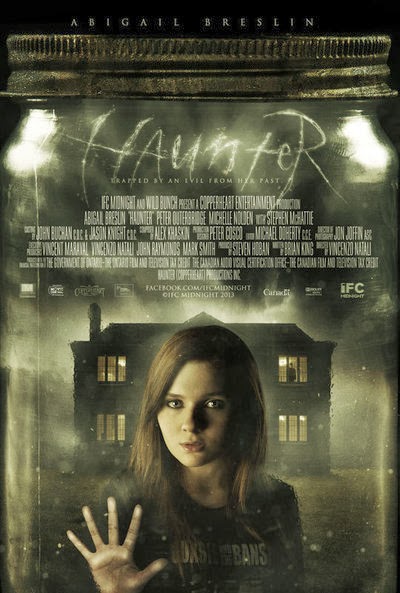 Ghost films. It’s like the oldest horror story in the book. People live on in spirit form and fuck around with the living in a house or some sort of location. As a horror fan, it’s hard not to assume at this point that I’ve seen it all when it comes to the sub-genre. When it comes to Haunter though, I have to admit that I was intrigued. How do you tell the tale from the point of view of the ghost? This little Canadian horror/thriller is a breath of life into the ghost genre in many ways (pun intended) and while it does suffer from a bit of predictability in the latter half, I was hooked into the story and the strong visual style of the film.

While the basic concept of the film is not very original (Oh look! We have to figure out how the girl was killed and then set her spirit free!), the idea of basing it around the ghostly young girl adds a bit of unique spin to the rather tried and true format. Abigail Breslin struts some pretty solid acting in the lead role as we follow her in her discovery that her family has been re-living the day they died over and over again for decades. Here is where director Natali (director of the oh so awesome Cube) shows his talents as he crafts a very solid mystery film concerning what happened to the family and why it seems to be covered up. The supporting cast is equally as fantastic with particular mention to the diverse moments for the father, played by Outerbridge, and the ever brilliant Stephen McHattie as the villain of the film.

From there to film does tend to fall into a few more cliché streaks as we are introduced to a serial killer and his many “collections” and our heroine has to stop him from taking another family into his haunted house of horrors. While Natali continues to lather up atmosphere with some strong visual choices and some intriguing use of color palettes, the film does suffer a bit as the writing gets predictable in the final act. Strong performances help as does Natali’s visual flair, but the film obviously loses steam at this point.

All in all, Haunter is still going to end up being one of those massively overlooked gems in the independent horror scene.  It’s smarter than 80% of the ghost films out there on the market and with Natali’s touch it certainly adds an aura of artistic panache that most of them lack. This might not be a film for everyone, it certainly lacks some stronger horror elements that are replaced with mystery thriller ones, but for this reviewer it was quite the pleasant surprise.

Written By Matt Reifschneider
Posted by DarkReif at 5:53 PM