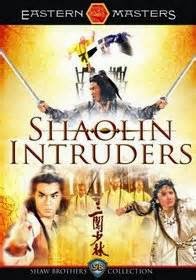 The Shaw Brothers production company might have spread themselves a little thin by producing such a massive amount of films in a short time period (most of which are of very similar style and execution), but it does create a rather wide array of films to choose from when sitting down to watch one. The choices are vast. It’s almost more fun to just randomly choose a title and sit down to experience it. This is how I discovered Shaolin Intruders. I didn’t recognize many of the names attached to it, outside of a few B-grade actors that appear in a slew of previous films, but I have to say that in the end I was massively impressed with the fun results of this film.

The clan disputes and vengeance motivation that is used as the basis for Shaolin Intruders is about as Shaw Brothers basic as they come. A couple of rogue swordsmen, both played with fantastic charisma by their respective actors, are drawn into a mystery plot as four major clans are being assassinated by four very powerful martial artists. With the help of a young woman, they find themselves at the Shaolin temple and in the middle of a conspiracy years in the planning.

While it might be all that original, Shaolin Intruders has a significant amount of fun and charm to make it entertaining as hell. The narration can be a bit muddled as it spends very little time establishing the massive amount of characters needed for the film (and a very random flashback with some awesomely cheesy costumes does seemingly come out of nowhere), but that never stops the film from moving at a lightning pace and rolling with some of the more outrageous elements. Some of the characters come off as almost comical in their over the top mannerisms, including one of our leads and his addiction to gambling/alcohol, but it only adds to the fun of the film and the mystery.

On top of that, director Chia Tang and crew slam down some insane fight choreography to add to the fun. The first third of the film tends to be a little light on the fights, but when our two heroes have to go through three tests at the Shaolin Temple things get ridiculous in all of the best ways. Shaolin Intruders maximizes the wirework kung fu to some awesome limits that seem less fantasy driven and more choreography driven. At one point one of our heroes actually spins like a drill to escape being trapped by a cage of staffs and our two protagonists have to fight an Abbott on top of like forty benches all stacked up. If there is anything to be said about this film, it’s that the fight sequences in the latter half are stunningly well put together.

Shaolin Intruders isn’t the most complex of martial arts films nor is it one to leave a profound affect on the viewer, but it’s a damn entertaining one with some very impressive choreography and two of the most charming lead characters I’ve seen in some time. Kung fu fans will definitely want to hunt this one down even if it is one of the cheesier films in the catalog.

Written By Matt Reifschneider
Posted by DarkReif at 11:22 PM