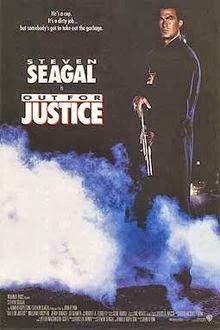 In this day and age, it’s hard to remember a time when Steven Seagal wasn’t the sort of joke he has come to be. Watching him phone in performances in direct to video actioners like Maximum Conviction, fight “real” crime on reality TV, or start babbling about running for office in Arizona has made it hard to remember why anyone even gives a shit about him to begin with. This is the reason I decided to go back and revisit the Seagal classics of my childhood. This is why I decided to review the brutal awesomeness that is Out for Justice.

As I sat there watching the credits roll (over a song that Steven Seagal co-wrote, for your information) I was perplexed by my latest visit to Out for Justice. The film is about as far as one can get from the mediocrity that Seagal has collapsed into in the last decade. It’s a vicious film, featuring some charming moments from Seagal, and really earns some of its action merits in its straightforward storytelling. Out for Justice is far from a perfect film, but I’m be damned if its not a kick in the nuts of awesome early 90s action.

Seagal plays a down on his luck, super-street trained cop who happens to have made a few enemies when he left the slums of Brooklyn to seek justice as a police officer. So when an old friend (played with creepy effectiveness by Forsythe) decides to blast a fellow cop mid-day, he’s the one that knows how to find him and bring him the true justice he deserves. Essentially, it’s the basic action cop formula we’ve seen a billion times. Anti-hero cop with a marriage on the rocks and a kid who seems like an after thought in the scripting process has to go around and bend/break the rules to make sure that a cop killer is found. Shit, this is the ABC’s of Hollywood low budget action. Out for Justice also attempts to add a few needless subplots about an abandoned dog and some mafia ties, but really its mostly padding just to give the film a longer run time and Seagal more people to flip. At times, it’s a little obvious and silly how forced some of the plot lines become when it sort of meanders away from the main structure.

The saving grace for Out for Justice is not the script. In fact, I would say the film might have benefited from a simpler script. What makes Out for Justice so effective at being a low budget actioner is the dark atmosphere created by director Flynn and the relative screen persona of Seagal himself. The film tends to want to really focus on letting Seagal scowl at the screen for a majority of the time (when he’s not flipping guys into shit or slamming bar tops onto hands), but occasionally Flynn pushes for some intriguing monologues that Seagal is mostly successful at delivering, even if they sort of show up at random times. From there, the film really grinds into a realistic action feeling to create a darker and more violent film. Gore is on tap, so is some pretty brutal language, and some heavy sequences about the life in the underworld. This is not the Seagal you see on TV and it makes for a rather vicious film.

While Seagal would continue to put out some decent films throughout the 90s and even into the early 00s, Out for Justice remains one of his best with its unrelenting pace and dark themes. For action and thriller fans, it’s a great film to add to your collection and one that I will find myself revisiting for years to come.