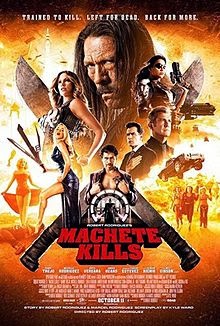 I know that I might be in the minority here, but I felt Machete Kills was a significant drop off in quality from the first one. Yes, I understand that the film is technically funnier, far more over the top, and generally more “entertaining,” but the entire concept of this sequel sort of rubs me the wrong way. Occasionally the film does earn some solid laughs and some of the casting is inspired, but overall the film felt too much like a Looney Tunes cartoon for me to care enough.

The idea for a Machete series is one that I whole-heartedly stand behind though. Danny Trejo (now pushing 70 years old!!) is a cult favorite of Blood Brothers and he deserves to have his charismatic and utterly badass mug plastered onto a franchise. Once again this rugged man owns as the titular character for the film. This time Machete is “recruited” by the President of the United States, played in utterly straight faced humor by Charlie Sheen…errr…Carlos Estevez, to hunt down a revolutionary who has stolen a big ass missile and threatens to blow up the White House if the US doesn’t invade Mexico to relieve it from poverty and tyranny by the cartels. 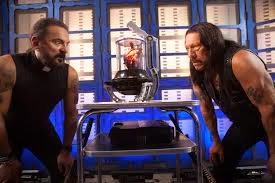 The concept starts off as a great B-grade grindhouse action flick as Machete watches his girl die, survives a hanging (perhaps the best sequence of the whole fucking film), and sets off to kill a split personality afflicted revolutionary. There is some fun action, despite the weird CGI in the film, and by the time Machete is on the run with the revolutionary Mendez the film starts cooking nicely. 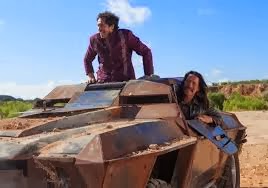 However, the latter half of the film sort of turns Machete into a super spy, Bond style, and has him hunting down an egomaniacal scientist hell bent on Earth’s destruction. This weird two villain split, while adding to the entire ridiculousness of the franchise, feels like a forced joke. At this point, Machete Kills ceases to be homage to classic grindhouse action and becomes a spoof on a series of films. While a very fine line can divide homage and spoof, the resulting feel of the film is vastly different at this point and comes down slightly off kilter. They add in a face-changing assassin that only succeeds in adding random cameos for the film and there is even an entirely awkward subplot about creating a race of superior humans in outer space Drax style. Mel Gibson owns as the other villain with his crazy shenanigans (although topping Bichir’s duel personality from earlier couldn’t be done), but it’s not enough in the end.

Machete Kills is a fun film and fans of glorious bad flicks will appreciate some of the references and the stellar casting, but overall it felt like a forced comedic version of what the first one was able to accomplish. To be honest though, I do hope that they end up producing a third one to finish off the series…even if it looks to be even more cartoonish than this one.