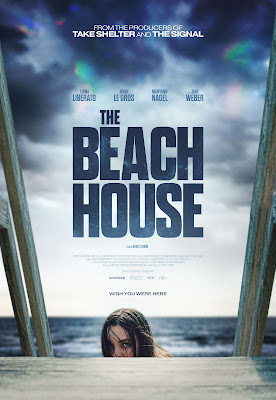 As I mentioned in a previous review just a couple of months ago, but 2020 seems to be the perfect year to use horror films to work through the insecurities, fears, and emotions that a rapidly changing world has pressed onto society. Perhaps it's just this sense of impending doom that really makes The Beach House such an impactful watch. It doesn’t help that the film sincerely hits the atmosphere and many of the feelings that being thrust into a global pandemic inspires. Does this make it a film that works because 2020 is upon us? Timing is certainly part of it, but it’s also a film that is so inherently well made and executed that even without the parallels it would have been a devastating and suffocating cinematic experience.

A young couple, Emily and Randall, go to his father’s beach house to reconnect and hammer out the dents in their relationship. Unfortunately, another couple, one of his father’s friends, is already staying there for the weekend. The two couples decide to stay for a couple days together and just enjoy the company. Too bad it’s also on the night that something in the ocean is unleashed from inside the Earth.

Telling the story about two couples suddenly facing an unknown, fast-moving, and frighteningly potent new disease is just the start of why The Beach House is effective. As a horror film, this kind of concept is hardly new (although I would say that this might be perfectly partnered with Cabin Fever for a similar concept but polar opposite tones) but as we always say here on the site – originality is overrated. The intimate setting, as indicated by the title, along with the very minimal cast makes for a claustrophobic tone that’s immediately set. Themes about uninvited guests, contact with the unknown and trying to find a path to survive the future just parallel the character arcs with the plot of its unleashed plague. It’s a subtle film, leaving far more questions in its wake than answers, but the writing is crisp and layered with thoughtfulness.

While The Beach House rides the recent boom of Lovecraftian films, particularly in the manner that it uses atmosphere, questions, and the everyday person coming into contact with the surrealistically otherworldly, it is a film where those same traits can make or break one’s enjoyment of the film. The small cast is solid in performance and the use of the bright white lighting and sets of the first half that collapse into darkness and sickly colors make for some impressive visual potency. It’s the rather slow burn pacing and minimalistic plotting that will more than likely split some viewers. The third act does deliver on some of its promises, particularly in how the plague seemingly changes its victims which is fantastically showcased in one sequence of incredible practical effects, but other than that the film plays things far vaguer and more atmospheric.

The Beach House is a sure-fire must-see in horror for the year. While some audiences may not buy into the vague writing and full focus on atmospheric dread mixed with some pops of body horror, it’s those very things that director Jeffrey A. Brown and his skills execute with incredible efficiency and thoughtfulness. It’s a perfectly timed film for release, but the Lovecraftian nature of the idea partnered with some sly moments of body horror it makes for one of the best films of the year thus far.