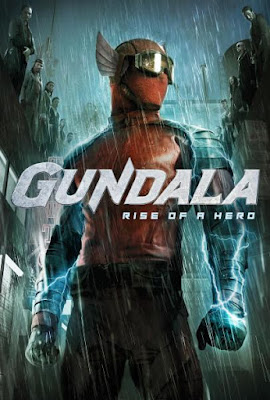 Not to make any mass assumptions, but I would venture to guess that a large swath of our readers here are like me, relatively unfamiliar with Indonesian comic book heroes like Gundala. This is not to say that there are not those who are very familiar with multi-decade spanning ‘Son of Lighting’ hero who can speak on length to the history, context, and commentary of the famous superhero, but it’s not me. My introduction to this hero is through this latest film incarnation, Gundala, and it’s essentially through the famous Indonesian director Joko Anwar that brought it to my attention. As a fair warning, I just wanted to make it clear that my knowledge of the character, his stories and his history is very basic and I will solely try to review this latest film on its own merits.

Although Gundala is not the first film version of the character, from my understanding there is one that was released in the early 80s, having a major director like Anwar and a major star like Abimana Aryasatya attached to this latest rendition only bodes well for the film. Some strong marketing, including a solid US trailer for the film, essentially puts the hero and this film firmly on the international stage. In an age where the superhero film rules all, it’s quite a fantastic idea to introduce an entire generation (internationally) to the character.

It’s this angle, the idea of introducing this hero to an international audience, that makes Gundala such a fascinating watch, if not inherently flawed. It’s an origin story, but it’s one where origin needs to be spelled like O.R.I.G.I.N. The film spends nearly a quarter of its run time with the hero, Sancaka, going through the harshness of his childhood and our hero really doesn’t fully “become” Gundala until the final third – and even then, he never dons his full costume until the post-credits scene. There is also a sense that the producers and filmmakers are so sure in the film’s success that they, problematically, start injecting all kinds of material that is meant to be setting up sequels. Secondary characters, plots, and obvious Easter eggs (again, I assume they are Easter eggs – but the manner that the film portrays them certainly feels that way) litter the film and only garner momentum into the third act where the film is still adding in material. Ambitious? Fun? Great for established fans? Certainly. It also makes for a messy, muddled, and often confusing narrative that is jamming too much material into its already robust 120-minute runtime.

With that being said, Gundala is a gorgeous film to watch. Anwar is a strong visual director and his use of durable production values and cinematography make this quite the impressive feast at times. There are some great performances to be enjoyed here, even when the film is leaning in heavily towards the cheesy comic tones of the genre – particularly from the villain Pengkor and his league of 1000 orphan assassin children (yeah, it’s actually kind of cool.) There’s plenty of fun comic book martial arts action that comes to fruition as the film plays out, but for action aficionados keep in mind it’s not the tightest choreography and execution. The action is more fantastical than some of the other Indonesian material as of late, so take some of it with a grain of salt. Even the “makeshift” suit for Gundala is pretty slick and looks like a modern cinematic hero. Compared to some of the screenshots I’ve seen of the 1980s version is definitely an upgrade for the modern.

All in all, Gundala is a mixed effort. There is a lot of heart placed into the material and having some true creative powerhouses like Anwar and the cast in the film adds a lot of gravitas to it. The major issue that arises is that its attempts at bringing the hero into the modern cinematic age of superheroes prove to be an ambitious endeavor that the film simply cannot swallow. There’s too much plot, too many characters, and a lot of seemingly inconsequential subplots that come and go with the wind. The third act in particular, with some of the most outlandish left turns and additional material to add to the entire film, undercuts some of the impact of the whole. Gundala is a fun martial arts laden, lightning wielding superhero film for the modern age, but its own ambitious nature undercuts so much of the fun and strength of its characters, actors, action, and visuals. Still, for someone that wasn’t familiar with the character or his story, Gundala is a strong place to start.

Now that the origin is out of the way, here’s to hoping the sequel can trim the fat and get deliver a great superhero action film in its purest form.