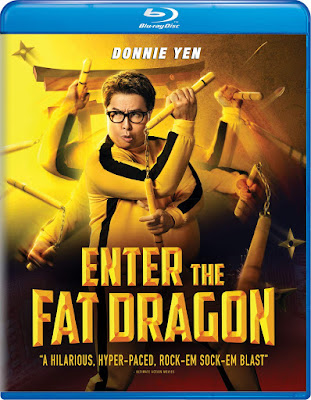 At one point, in early 2020, the new version of Enter the Fat Dragon looked to be one of the more exciting and intriguing releases of the year. Now that most of the theatrical system has been completely stripped of life, it may be one of the few releases that the US sees from the normally booming Chinese market. Still, it’s always a welcome addition to the collection when a Donnie Yen film hits Blu Ray and any fan of the actor will want to add this one to theirs.

While you can read my full review for the film HERE, the gist of it remains the same: Enter the Fat Dragon is a highly entertaining action comedy that blends modern effects with old school slapstick martial arts set-pieces. Granted, it’s a film that’s not for everyone as the comedy is very broad with plenty of pop culture references and outlandishly convoluted set ups, but the action is so blissfully fun that it powers through the more tentative narrative and character elements that can bog down the plot. It’s hardly a perfect film, but there is a lot of heart, humor, and high-flying kicks to keep most martial arts fans amused.

The latest Blu Ray release for the film, courtesy of our friends over at Well Go USA is a slick a fantastic addition to the collection. The film doesn’t have any special features outside of some trailers, but the fantastic picture and sound quality on the Blu – for a film with plenty of big visuals like its finale, it’s the best way to experience the film. If you don’t have a Blu Ray player, there is a DVD version available too.

Enter the Fat Dragon is out now from Well Go USA.

Written By Matt Reifschneider
Posted by DarkReif at 9:34 PM