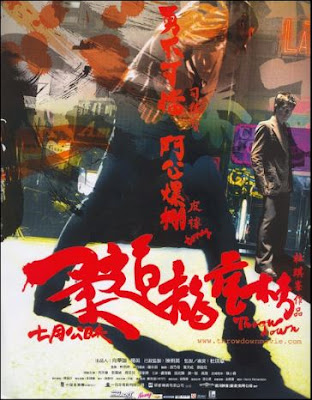 It’s always a good day at the Blood Brothers offices when there is a new Johnnie To Blu Ray release. It’s even better when it’s one of his often-forgotten films like Throw Down. The icing on the cake happens to be when it’s a Masters of Cinema release from Eureka. While Johnnie To remains one of my favorite directors, this genre shifty film from Hong Kong’s Godfather of the modern auteur is one that has not made it into my collection until this latest release. I was missing out. For all of you out there that have seen it before, I’m ashamed that you haven’t peer pressured me into seeking this film out before. Nonetheless, the sin has been forgiven, and Throw Down remains a true hidden gem in his filmography. Featuring an entire battalion of memorable performances, a bevy of fantastic set pieces, and a bold and fascinating salad of genres, this film is an artful and wholly entertaining cinematic experience that showcases all of the intriguing elements of a Johnnie To film in one package.

When a young and hotheaded Judo fighter, played with an invigorated energy by Aaron Kwok, arrives at a small night lounge, he unwittingly finds himself embroiled in the strange life of a down and out Judo champion, Sze-to Bo, played by Louis Koo. The latter is in debt and a drunk, but the combination of this young fighter and a down and out singer, in a blissfully charming performance from Cherrie Ying, could give him the courage to find his way again.

Lovingly dedicated to the late and iconic Akira Kurosawa, Throw Down represents a weirdly thoughtful look at combining the artistry of modern character work, powerful comedic chemistry, and classic Hong Kong martial arts action. In its genre-blending style, Throw Down does not necessarily lean into any one territory in a way that would immediately grab a niche audience, but for those willing to buy into what To is utilizing it’s something of an experience. The film doesn’t even bound between the genres. It’s a thoroughly smooth blend. Laughter, excitement, thrills, and even romance are all balanced in the narrative in a way that shifts between the genres without as much as a hiccup. It’s an impeccably written script that To massages into shape with impressive nuance and care.

Like many of To’s other films, Throw Down tends to be far more artistic than the genres it combines. There is a cheesy element to it, particularly in the character arc of how Bo must rekindle the love in himself through the two strangers that stumble into his life simultaneously, but it’s handled with such heart and humanity that it remarkably works. A simple scene where the three friends attempt to recapture a balloon stuck in a tree seems like fluff on the outside, but between To’s delicate hand and three incredible performances from Koo, Ying, and Kwok it’s a heartwarming sequence that digs into the humanity of its characters. Even when the film leans into its more serious set pieces, particularly as Bo attempts to outrun all of the gangsters that he owes money, it is done with the same sense of humanity.

Throw Down is a film about Judo fighters challenging one another and the film does not let up there too. The fights are often realistic and occasionally brutal with the highlight being a massive bar brawl which transforms into an epic sequence of destruction that’s blissfully choreographed and Tony Leung Ka Fai turns into one monstrous badass. While the action is plentiful, it’s used as character motivation for so much of the cast, to resolve conflict, develop character, and push the plot forward that To completely subverts that narrative pause so many films use to lead into a big action sequence. Action fans definitely will enjoy what the film has to offer here.

Throw Down is Johnnie To at some of his most human without sacrificing any of the entertainment of its genre-shifting concept. It’s releases like this that make me incredibly happy that I own a region free Blu Ray player. The film is simply a masterpiece of artistic filmmaking from an iconic auteur that features a plethora of incredible performances, a steady hand at the visual imagery, and a heartfelt narrative that brings it all together into one incredible cinematic experience. I cannot recommend this film enough. 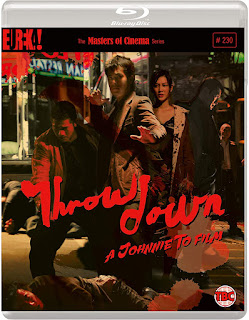