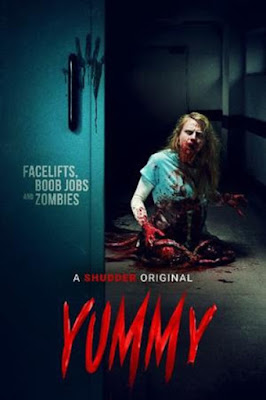 When it comes to the (shiver) zom com, I’m a rather unforgiving critic of the genre. Comedies are rarely my thing and the zombie sub-genre is so played out at this time that, as I mentioned in my review for Blood Quantum, it’s something of a chore for me to jump into again and again. Yet, Shudder has been something of a wonderful well for finding exclusive material that is, even at its worst, intriguing. It’s the latter that eventually lead me into pressing play to stream the Belgian zom com Yummy to begin with. While the film certainly features some decent pieces to it that will appease fans of gore gags, goofy side characters, and insane setups, it’s also a film that rarely hits the heart of its narrative in a way that lifts it above the gags.

When a couple decides to go to a cheap clinic for a breast reduction surgery (with the wife’s mother tagging along for support,) they accidentally stumble into a facility that also happens to be testing drugs that reanimate the dead. When an accident unleashes a zombie into the facility, everything quickly dissolves into chaos and the couple, along with a handful of other survivors is tasked with escaping the complex.

Almost immediately, Yummy presents itself as a film that heavily relies on many of the basic comedy tropes that intend to appeal to a very broad audience. A car ride with the irritating and overbearing mother-in-law, plenty of big breast jokes, and they even throw in the skeezy male secondary character that puts the moves on the wife and attempts to thwart the goofier husband – because I assume that’s something a person would do in the wake of a zombie outbreak in a hospital. As mentioned, comedies are rarely something that hits home for me and so much of the humor in Yummy is generic caricature work. There were only a few jokes that truly hit for me, but if you enjoy your giggles in the low brow and broad variety then perhaps this one will have a higher batting average than it did for me.

With the ‘com’ elephant addressed, it’s time to address the ‘zom’ part of the genre. Yummy, for all of its silliness and modern slapstick wink-wink attitude, actually delivers on some fun zombie chaos. Granted, the setting of the hospital and the overall zombie designs are not much beyond ‘meh,’ the fact that the film has the wherewithal to focus on delivering its gore with practical effects automatically gives it an edge. The gore is effective, the atmosphere when it leans horror is heavy, and it allows the film to deliver a final 15 minutes that is both tension-filled and shocking.

Yummy may not be the best of the zom com genre, nor is it particularly memorable outside of a few gore gags and a fantastic dark edge to the final act, but with the right mindset fans will enjoy it. Considering it cost me nothing with my Shudder subscription, it’s a fine way to burn 90 minutes.