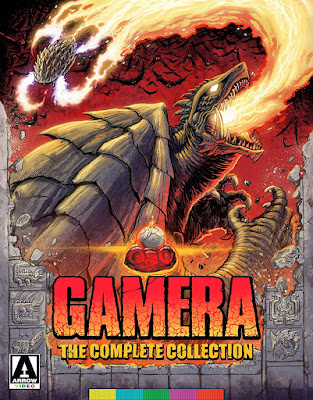 To give even more power to this reclamation of everyone’s favorite jetpack kaiju, Arrow Video has amassed a massive new collection of all 12 of Gamera’s films. With the original run of 8 films, the 90s trilogy, and the final film – Gamera the Brave from 2006, this collection features them all. This series of reviews for the set will go briefly through each entry and then recap at the end thoughts and opinions on the set itself. Considering the number of films included, this series of articles will definitely be as massive as Gamera but will serve as a guide to all the films. 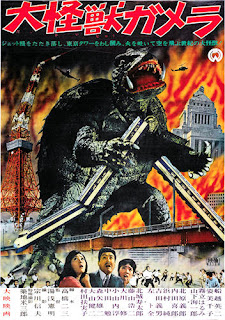 Following in the footsteps of most of the Japanese studios in the wake of Godzilla’s success ten years prior and the subsequent boom of kaiju fever in the 1960s, Daiei found a surprise success in this franchise kickstarter. Gamera launched a new kaiju into the arena. Running at a brisk 78 minutes, it does it with such efficiency that it’s easy to see this film as both the perfect way to start a franchise and one that could easily be sold and translated towards TV and foreign release. It’s in the simplicity that Gamera finds its effectiveness. It’s a lean, mean, gree…black and white delivery machine for miniature destruction, outlandish scientific mumbo-jumbo, and entertaining silliness.

Combining the dual narrative of scientists chasing down a recently unleashed giant turtle monster from the ice caps and that of a local Japanese family trying to reign in a small boy, Gamera hits many of the usual tropes of 60s era kaiju films. There are hints of science fiction, the family friendly tone by having a kid as one of the main protagonists (a tactic that Godzilla would soon lean into for their franchise for the next handful of years too,) and plenty of monster mayhem to entertain audiences. For this reason, its’ a great place to jump into the franchise for both newbies and kaiju fanatics alike.

Some decent performances, fun visual moments – including the first moment where Gamera retreats into his shell and ignites his jets to shoot off into the sky after falling onto his back, and a fantastic score make the film a decently effective kaiju film. Considering this is the year that saw the release of Invasion of Astro-Monster for the Godzilla franchise, the simplicity of its story and approach oddly feels fresh. The execution is strong from director Noriaki Yuasa and while the script does feel thin and often lacking any real human connection (the lost turtle and the kid plot is often awkward) the speed of its run time mixed with some great moments make Gamera, the Giant Monster a fantastic start and one that takes the increasingly outlandish kaiju genre back to its basic roots. 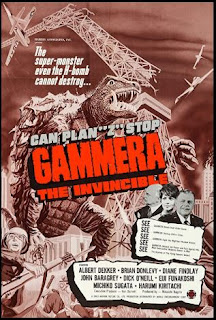 As a side note, this Arrow Video box set does feature the American cut, Gammera The Invincible, as a bonus feature. This is often the one that most American’s are familiar with as a film which features a notable number of additional scenes of American military added in to help explain the plot and give the film a more traditional US science fiction tone. There are some additional voice-overs to further explain the spaces between monster madness and some of the Japanese family sequences have been trimmed. In his introduction to the original film on the disc, Japanese cinema expert August Ragone seems to indicate that he believes the American cut to be a more effective one, but it doesn’t make a whole lot of difference for me either way – considering the simplicity of the original one is what makes it work.

Stay tuned for the next article which will cover Gamera Vs Barugon and Gamera Vs Gyaos!