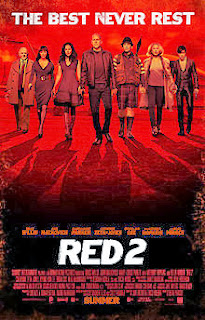 You can go back to read my review for the first "Red" if you so want, but I can save you some time and just recap it as 'fun, but flawed.' I wasn't necessarily sold on it as many of my peers and so when it came time for "Red 2" to hit theaters I gave it an almighty skip. Now that I've had time to view the rather by-the-numbers sequel, I have to say that it actually makes the first one better. While I still felt that "Red" was an overly flawed and somewhat spastic film, it could have been "Red 2" which is mundane, forced, and fights off horrible bouts of ADHD just to get through its run time.

Frank Moses (Willis) really just wants to have a normal life with his new girlfriend Sarah (Parker), but when you are considered RED (that stands for Retired Extremely Dangerous) things never really leave you alone. That's why when his friend Boggs shows up again (Malkovich), Moses knows that a shit storm is brewing. Now he's on the run from a couple contract killers (Byung-hun and Mirren) and trying to solve a mystery about a scientist (Hopkins) that he was personal protection for decades ago.

Just like the first film, "Red 2" has a lot of talent behind it. The ensemble casting is to die for (including some secondary roles for McDonough, Zeta-Jones, Thewlis, and a surprise pop up from Brian Cox) and the idea of having an elderly spy action/comedy has its merits. I'm even going to admit that "Red 2" has its moments. Malkovich owns every scene he is in as do a few of the other characters like Mirren and Hopkins and a few of the action set pieces are impressive - including the choreography of Byung-hun's fight with the cops where he is handcuffed to a refrigerator door handle. I think if I was a much younger self, say 15 or so, I would have loved "Red 2" with its quirky humor and relentless pacing.

Outside of that, "Red 2" is a narrative typhoon of random plot twists and a terribly forced romantic subplot. The writing of "Red 2" can be utterly episodic as Moses and his team leap from one weird situation to the next following the plot which seemingly tries far too hard to be far too complicated. While I appreciate the paranoia approach of giving the audience a lot of characters that switch sides and loyalties while an extensive mystery is uncovered, "Red 2" takes it to a horrible inconsistent level. The action is more or less there for obvious visual appeal and the plot makes some of the most asinine twists this side of a M. Night film.  It's like riding in a car with a driver who continually slams the brakes and gas as fast as possible while swerving around and making quips about being old. While initially it might be fun, by the time the first 20 minutes has passed you just end up being nauseous and irritated.

To add salt to the wound, half of the actors are essentially phoning in their performances. Willis looks bored in the lead role, Parker's quirky girlfriend character seems to be more of a joke then previously, and Zeta-Jones is a useless character and she knows it. Nothing inspires good trust in your audience to just go with the ridiculousness of the film when half of your cast obviously doesn't give two shits about what's happening either.

There might be some fun to be had with "Red 2" in some solid moments, but they are few and far between in a film that seems ill prepared to take itself to the next level of comedy and/or action. How do you have a scene between Hopkins and Cox and not use it for the greatest Hannibal Lector joke of all time? For fans of the first one, you might be able to dig into the film and find something to latch onto. For me, "Red 2" was a massive disappointment that lacked on almost every level.

Written By Matt Reifschneider
Posted by DarkReif at 6:49 AM