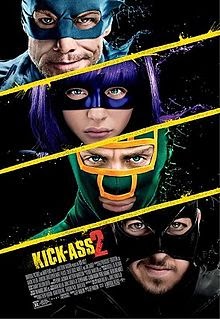 The first "Kick-Ass" was indeed a nice surprise. While I'm not familiar with the comic books that these films are based on, the blend of super dark humor, violence, and a 'finding your identity' story worked surprisingly well for the 'real super heroes' angle of the first film. I was heavily skeptical of "Kick-Ass 2" though considering Matthew Vaughn was replaced by "Cry_Wolf" director Jeff Wadlow and it lacks the screen eating talent of Mark Strong and Nicolas Cage from the first. For the most part, my cautions were correct as "Kick-Ass 2" substantially falls short of the original one in many ways.

After the events of the first film, Dave Lizewski (Taylor-Johnson) has grown bored. He gave up the super hero gig and tried to focus on just being in high school. He decides to start training further with Mindy Macready (Moretz) to truly garner some fighting skills. When she decides to give up the hero gig for the sake of a promise she made her father, Kick-Ass decides to team up with a slew of other heroes that have appeared in his wake...which on further spurs his arch nemesis Chris D'Amico to take on a new super villain identity, The Motherfucker, and start his own army of villains.

While all of the elements remain that made the first "Kick-Ass" so...kick ass...the balance between them seems to be all sorts of haywire. The humor feels more forced as it tries to fit a lot of plot into one film and tends to have to sacrifice a lot of character work and subplots to do so. For starters, "Kick-Ass 2" tries to incorporate Hit Girl as a second lead with her own separate story. Trying to balance the two tends to come off as hit or miss...particularly when the Hit Girl story is far more engaging for the audience then Kick-Ass' even if they mirror many of the same themes. The overarching identity themes also seem redundant as we continue to look at finding ones individuality and purpose like the first film, just with lesser effect.

This leaves less room for the actually plot which revolves around some mainstay comic book hero themes like vigilante justice and the act of balancing good and evil that for every hero must face when a villain comes knocking. This also leaves less time for some of the more interesting (and stronger) secondary characters like Colonel Stars. While Jim Carrey is a significant asset to the film with his screen-eating abilities, a much needed and missing aspect with the loss of Mark Strong and Nic Cage from the first, his character is more or less left out to die as we only find out various little things about him and his screen time is severely limited. The rest of the secondary characters are left with even less to work with (including Donald Faison of "Scrubs" fame and the legendary character actor John Leguizamo). Some of them are completely cut, including the girlfriend from the first film, and some are changed for an even more 2-dimensional turn like Mintz-Plasse as the film's main villain. It's a sad, but true statement that "Kick-Ass 2," with all of this potentially awesome material, never finds a place for most of it.


Luckily, there are moments. Most films have moments overall where it works and "Kick-Ass 2" isn't a complete disappointment. Hit Girl continues to impress as a character with Moretz in the role and Wadlow actually seems fairly competent with the action sequences throughout including the awesome Hit Girl seige on a van on the road that includes some of the most brutally violent moments of the film. I'm happy that they didn't shy away from people getting kicked onto an interstate. This franchise is known for that kind of violence and it should be there somewhere. Unfortunately, the humor is extremely hit or miss with the random writing and for every funny sequence (the shark in the tank in The Motherfucker's lair) there is an equally, if not worse, unfunny one (the sick stick is simply awkward).

All in all, "Kick-Ass 2" entertains, but fails to find its footing to balance the humor, violence, and thoughtfulness of the first film. Too many characters, too much of a similar plot, and two leads waters down the entire experience. While rumors swirl of a third entry into the franchise, I can only hope that they go back to stronger writing and characters instead of focusing on jamming as much plot and random sequences as they did for this one.