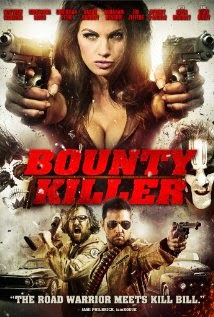 There are good films and then there are films that are good at being what they are. There is a very distinct difference in the definition. A film like "Bounty Killer," for example, will not win any kind of award in the near future. It is, however, one of the greatest B-grade action films I've seen in the last handful of years. It's not a perfect film, nor does it ever seemingly try to be, but "Bounty Killer" is a vicious and hilarious action packed ride of modern grindhouse magic that had me by the belt loops and hauled my ass across all kinds of ridiculous.

Drifter (Marsden) and Mary Death (Pitre) have a weird relationship. Both are Bounty Killers in a post apocalyptic world, where white collar criminals are the biggest prey and their celebrity status earns them a place among the elite...and they used to be partners. When it comes down that Drifter is the next name to come down for bounty, he has to trek his way across the desert to clear his name from The Council of Nine all the while dodging corporate assassins, gypsies, and his own protege - Mary Death.

A film like "Bounty Killer" is made for a specific group of people. It's foundations lie in 70s and 80s grindhouse and the film builds on this with homages to spaghetti westerns, post-apocalyptic films like "Road Warrior," and a low budget style and humor that Troma has been utilizing for years. What will probably make "Bounty Killer" hit or miss for some people is the fact that its a very modernized version of that classic grindhouse style, not unlike "Ninja Assassin" was for ninja films, and its comic book visuals and often cartoonish violence may not play up to some critics (and fans') standards.

For this reviewer, the combination of modern humor, genre blending, and classic grindhouse foundations is a sure fire winner. Director/co-screenwriter Henry Saine seemingly knows his shit with "Bounty Killer" and fills the film with as much random B-grade film shit as possible. The film is filled with everything that a B-movie fan could love. Outrageous amounts of violence, some solid gore, "Road Warrior" inspired scavengers that lead us to a massive western inspired stage coach chase, terrible one liners, Monty Python-esque corporate villains, and two heroes that rely on screen presence and Saine's visual charms over true acting ability. While the results can be a bitter scatter-shot (the horror inspired sequence in The Badlands comes off as perhaps the weakest moment in the film), the overall ability to entertain and blend genres cannot be understated.

While the film starts off with a lengthy and rather silly concept about post-apocalyptic world changes and evil corporations, it's easy to see that Saine and company mean to be very funny in a very serious manner. Saine has a very slick visual style and earns his merits by doing some very impressive action sequences with very little budget. An office raid at the end is done almost completely in the background in a very slick sequence and the previously mentioned western style chase hits every cliche in the book...with vigor and excitement. The characters can be a bit of a gamble, the obvious side kick can be wearing and Busey's villainous goon is underused, but dammit if newcomer Pitre doesn't steal this movie. While her rather silly costume seemed to be a reach at first, she shows incredible charisma onscreen and takes a 3 rated film up to 4 with just her presence and execution of the character. While she might not be the full "lead", she might as well have been as she dances circles around Marsden. 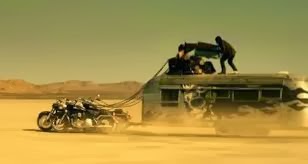 For those looking for a fun film experience or those who love a bit of B-grade awesomeness in their cinema diet, "Bounty Killer" is a sure-fire win in my book. It's funny, action packed, and charming throughout and it blends just enough random genres that there is something for everyone here. It's not a film for everyone, but for those who love some grindhouse throwback I can't recommend "Bounty Killer" enough.