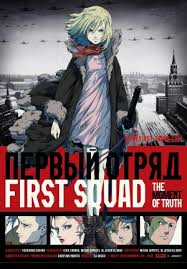 Hey all! Welcome back to the anime review section of Blood Brothers Film Reviews . After my recent review of "Fate/Zero" I had been feeling like I needed a few more history lessons. So I have decided to embark on a journey to the front-lines of World War II where the battle between the Russians and the Germans has come to a stand still.

In this stand alone film/ova we will follow around a gifted Russian clairvoyant named Nadya, who is the only agent left from the "First Squad" that can change the course of alternate history and stop the Germans from certain world domination.

In the winter of 1941/42, an occult team of Russian teens called the the 6th Division set out to stop the Germans own occult division known as Ahnenerbe, who themselves are on a mission to raise the evil Baron Von Wolff from the underworld. Thusly turning the tides of war in the favor of the Germans.

This film is brought to us by Manga Entertainment in collaboration with Molot Entertainment and Studio 4degrees C. Directed by Yoshiharu Ashino  (Tweeny Witches) and starring American voice actor Cassandra Lee Morris (K-On) as Nadya. "First Squad" is a collaboration between Russian writers and Japanese animators, which sounds awesome, but someone was on the wrong page.

Right off the bat, this film makes sure you know it's not trying to be a historically accurate piece. Only using WWII as its back drop for over the top action scenes and no real story.

I am not real sure what the writers intended this movie to be, but I can't believe the final product is it. The idea is one that I for would love to see done right. I love WWII era films and action films, but trying to buy into this occult stuff just was not going to happen this time around.  The characters were as bland as dry toast without any sense of emotion and thus I had no emotion invested into them.  We, the viewer, are thrust into this film with little to go on and expected to know these characters and care about their outcomes. Reality disagrees. We get a little fake documentary type narration during random cut scenes and a little of Nadya's past through dream sequences. Otherwise we are on our own to follow this rocky road.

With very little to love about this film, I will say the animation is great. and I would expect nothing less from Studio 4 degrees C. It is clear they put a lot of effort into making this film look awesome.

I just wish they could have done this film with some decent writers and make it into something we could all enjoy. Instead we are left confused and wanting more. I feel like they just crammed everything together to spit out a film and the end result shows it. "First Squad" needed more time and structure to be a success or at least a complete film. If you want to check it out for yourself, you can snag a pretty cheap copy below. I will end with the fact that I actually watched this movie 3 times trying to find something I was missing but at the end I still feel empty. I give it: