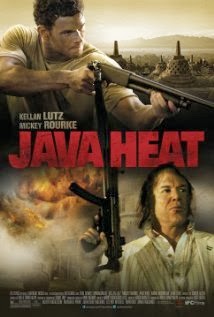 With the upcoming inclusion of Kellan Lutz in “The Expendables 3,” I went to IMDB to figure out why he was cast in the film outside of his random popularity as the guy who rides on the back of a jeep in the “Twilight” films. There I discovered his rather intriguing filmography included a widely overlooked action flick “Java Heat.” Since the villain in the film also happened to be one of my favorite actors Mickey Rourke, I was quick to pounce on the film. While it’s easy to see why “Java Heat” might have been overlooked by the mainstream powers that be, it also happens to be a fairly impressive action thriller. Is it cliché and a bit too predictable? Perhaps, but it also sports a variety of charming moments and solid action set pieces that shouldn’t be overlooked either.

When a young marine (Lutz) heads off to Indonesia, his investigation of a bombing that killed the young Sultana seems to clash with a local detective (Bayu). As it turns out they are both looking for the same ‘terrorist’ Malik (Rourke) whose underhanded business dealings have seemingly taken something form both of them. Fighting against corruption, a villain with far too many resources, and each other’s cultural differences, the two heroes will have to cross a few lines to find the truth…and bring justice to Java.

“Java Heat” owes its fair share of plot points and character beats to classic action films of the 80s. The buddy cop system, a foreign land for one of them, and corrupt systems all smack of something we might have seen in 1984 more so than 2013. While the plot itself, part mystery and part action, might be rather predictable and cliché at times – particularly in the latter half when our two heroes finally team up to take down the Bond-esque villain – it’s also fairly easy to digest for audiences. This might leave a bit to be desired originality wise, but it also allows the film to flourish on elements that raise it above being just another cliché action flick.

Young director Conor Allyn does execute the film with rather high regard. The strong cinematography, musical cues, and atmosphere certainly help create a film that rises above its ‘straight to DVD in the US’ nature and he piles on enough charm impressive action bits to make the entire thing entertaining as hell. Lutz and Bayu spark with surprisingly effective chemistry, even if Lutz himself has a few cringe worthy moments, and their combined action efforts do not go unnoticed. A rather oddly edited motocycle chase through the alleys of an Indonesian night has some great stunt work and a rather funny armored car heist features some solid one liners and great physical moments. Allyn and company strike for gold here and while some of it doesn’t quite hit the mark, most of it does.

Ironically, the weakest element in “Java Heat” is Rourke as the villain. With his shifty French accent (at least I think it was French…), Rourke seems to phone in his performance for most of the film. Granted, he’s not given a whole lot to work with initially, but he’s easily the biggest hit or miss actor in the whole film and one that tends to hurt scenes more than add to them.

“Java Heat” was a pleasant little gem hidden from the world. It’s fun, easy to watch, and ultimately an entertaining action thriller that will probably end up overlooked by far too many critics and fans. Lutz holds his own as an action hero here showing some screen presence and charm and Bayu should earn himself some praise with his role here as the cop doing his best to only do good. For action fans, this is a film to dig up even if its for just a rental.