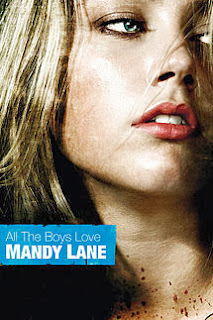 In this modern age, those who are slightly internet savvy know when films happen and are privy to the hype for some of the independent flicks. This is where I first heard about "All The Boys Love Mandy Lane." An intriguing modern teen spin on the slasher flick, the film received some mixed reviews, but the reviewers that I trust seemed to be in love with the picture. So I got excited. And after waiting some five years to see it (I didn't hear about it until 2008 or so), my expectations for this mysteriously un-released film were very high. So I suppose it's not all that surprising that I was disappointed with the film when I finally got to see the anticipated horror film. While others praised the film for its blended genres, I found that it mostly fumbled through them and eventually found itself sinking into an identity crisis of sorts. "All The Boys Love Mandy Lane" was not the film I expected.

Mandy Lane (Heard) became the most desirable girl in high school over the summer. Enough so, that her friendship with Emmet (Welch) is strained. After a brutal accident leaves one of the jocks competing for her attention dead, their friendship seems done. Nine months later, a group of friends finally convince Mandy to come out to a small party at a remote farm. While she seems finally ready to break out of her shell, somebody seems intent on ruining the shindig by piling up the bodies.

Playing off as one part "I Know What You Did Last Summer" and one part arthouse-teen-identity film, I see why many critics seemed to dig what "Mandy Lane" had to offer as a modern slasher. Heard seems to own the title character's awkward moments of new found attention and there is a definitely indie film vibe with the musical cues and "in the moment" discussions as these wayward teens attempt to discover themselves. Even director Jonathan Levine seems to understand how to shoot the style to make it visually interesting enough to carry the film. For a low budget indie horror flick, it seems to be a rather well shot and acted flick.

The inherent problem then sits on the weird flips between genres and the rather generic writing that the rest of the film is built on. The flow of "Mandy Lane" seems jumbled and halfway disoriented as we go from an awkward scene about penis jokes to a full on slasher kill. While both are decently shot and acted, the leap from the former to the latter is almost surreal. It takes the viewer out of the experience. Partner that with a ton of cliche moments from both genres (Oh no! A pot smoking sequence! Weird, a couple goes to the barn to have sex and ends up dead!) and some blue print style characters for the secondary roles and it never rises about either genre it tries to mix.

The film obviously tries to throw in a few twists into the mix to keep the audience guessing in true slasher style. Who's the killer? Wait, no they tell us who the killer is like half way through and its no big surprise at all. But wait, maybe someone's working with the killer?! If you haven't guessed most of the twists by the first 20 minutes then you obviously don't know your slashers. This film was as predictable as it gets when it comes to the horror plot progressions. The only twist, the final one at the end, that didn't seem predictable was so ridiculous and nonsensical that it wasn't a shock as much as it made my brain hurt from not making sense.

To be honest, if my hopes weren't so high going into the film, I might have enjoyed it a bit more for its stronger elements instead of picking at all of the missed opportunities. For those who enjoy a rather mediocre slasher with shoe horned modern teen elements then "Mandy Lane" might be just for you. I, for better or worse, was expecting something a bit more ballsy from the film and less cliche which was essentially nowhere to be found here. Take it for what it is, "All The Boys Love Mandy Lane" is a run of the mill kind of film and one that was a massive disappointment.