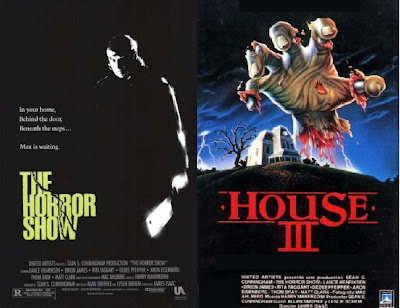 I was a huge fan of the “House” franchise as a child with the original quickly becoming one of my favorite films of that time when my family rented it to watch on a Halloween night. When my Dad took me to a newly opened video store I was flabbergasted to see that they had “House IV” for rent. I didn’t even know they made a “House III”! Hell bent to see every entry into the series I searched every video store far and wide for what seemed like a non-existent film. None of the stores had “House III” in their database and none of the clerks had ever even heard of the film. It was litterly driving me mad as it seemed “House III” was missing in action, but if there was a “IV” then there had to be a “III”... right?! Please keep in mind this was before the internet so obtaining information on films was extremely hard and if it were today I would have found my answer with the simple click of a mouse. Determined to find this non-existent film I finally got an answer when I purchased a movie review book which included a list of alternate titles and it pointed me in the direction of a flick called “The Horror Show”, which was retitled “House III” for the foreign market release. My white whale had been harpooned and I set out to find a copy in which I succeeded at. After years of hard detective work imagine my disappointment upon actually seeing the film that it had NOTHING to do with “House” series, other than crew and behind-the-scenes members (like producer Sean S. Cunningham) and was only re-titled for the foreign market to capitalize on the success of previously established “House” franchise. Grrr.... 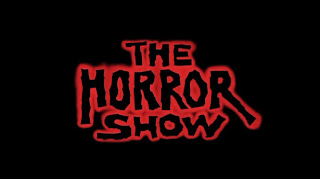 The plot isn't about a haunted house, but a serial killer that comes back from the grave to torment the police officer that captured him after being fried in the electric chair. As one can tell the plot is almost identical to the Wes Craven film “Shocker” released nearly 6 months after the premier of this horror number and like that film "The Horror Show" suffers from many faults. 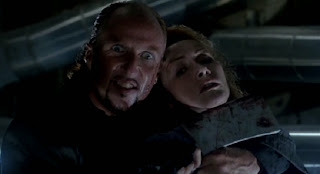 Putting aside my quibbles with its alternate title, let’s look at “The Horror Show” on it’s own without the shadow of the horror franchise it is connected to. The strongest part of this routine “killer comes back from the grave” plot device is the cast which consists of  veteran tough guy character actors Lance Henrickson ("Aliens", "The Terminator") as the cop and Brion James ("Blade Runner", "48 Hrs.") as our killer appropriately knick-named “Meat Cleaver Max”. This is hands down my favorite Brion James performance and he is downright menacing as our killer, especially his crazed eyes and high pitched snickering laugh. Seriously the cast makes the film. Director James Issac also goes extreme with the violence as the film is brutal and gory, but being released in 1989 the MPAA butchered the film much like Meat Cleaver Max carved up his victims. Even butchered by the MPAA the film is still plenty violent but the only way to see it in its completely uncut is a European DVD release under it’s “House III” title. 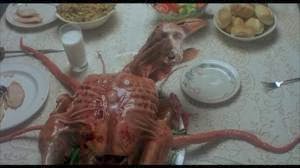 With the cast and violence being great, what kills the film? Let’s call it weak foundations: routine plot and some insanely asinine moments. The film just tends to drag in-between special effects sequences and raps up with a rather un”cleaver” ending. Also the film is full in insanely stupid moments climaxing with a scene where Brion James’ face appears on a cooked turkey. Seriously?! James is not an attractive man and is especially unattractive when his face is plastered on a piece poultry. The serious tone and these silly sequences mix like oil-and-water making the caterpillar dog in “House II” seem somewhat acceptable as that film at least had a goofy tone to match. 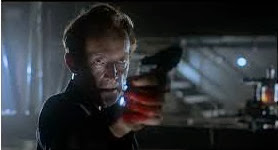 Since “The Horror Show” (not as deceptive as “House III” but still a terrible title none-the-less) is so similar to its partner in crime “Shocker” it’s hard not to compare the two and horror fans are constantly giving their reasons for why one is better than the other. For me they are pretty damn close and both are extremely flawed. I love the cast and violence of the “The Horror Show” but overall I would have to pick “Shocker” as I find Craven’s clever humorous style fit the film better. “Horror Show” just is too tedious and the insanely stupid moments aren’t matched by the serious tone and instead come out unintentionally funny. People looking for a good third entry into the “House” franchise… well I think you will get the drift as not only does the plot having nothing to do with a haunted house, but also the serious tone goes against the goofy nature of the previous two outings. Still a fourth “House” film would get released (considered by fans the ‘true’ third film) which honkers back to the tone of the first films yet somehow worsened the results.

Posted by Cronosmantas at 7:02 PM