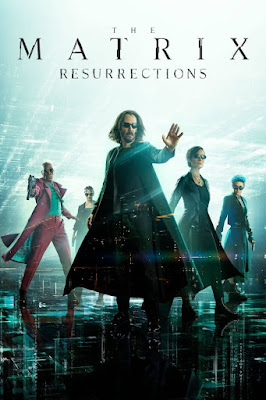 There’s a joke somewhere where I sarcastically connect the term ‘reboot’ between a computer being reset to cleanse itself of running programs and the idea that this long awaited sequel, The Matrix Resurrections, serves as both a sequel and a reboot to the series as it attempts to enter into its next phase of existence. It’s an easy joke to make and I spent a stupid amount of time sitting in the theater prior to the start of the movie trying to craft the wording and introduction to this review.

Too bad The Matrix Resurrections beat me to the punch.

This fourth film in the series, although one might consider it the fifth since the Wachowskis consider the spin off film, The Animatrix, as canon in the series, knows exactly what purpose it serves. This is a film that’s meant to recapture the delights of the original 1999 genre-bending classic while pushing the franchise into a new age for possible new sequels and IP creation while feeding into an audience’s nostalgia. It’s the quintessential reboot. That’s the definition. That’s what a reboot is and does.

She knows it so well that she writes and directs the film in a knowing way. The Matrix Resurrections regularly spends massive swaths of its first act holding up a middle finger to the studio system and the trends of modern cinema. In the same way that Wes Craven used the Nightmare on Elm Street series to comment on itself, a snake eating its own tail, in the dynamic and unprecedented seventh entry of that franchise, New Nightmare, The Matrix Resurrections is here to criticize its own existence while using it to continue its layered approach to delivering fun action cinema and injecting social commentary.

Well, boot me in, Lana. I’m fucking here for that in all of its complex, cheesy, and insane glory.

To try and unravel the plot of the film is for the film to do, but rest assured it’s as outlandish as one would expect - particularly in how it builds the original Matrix trilogy into its own world as a video game created by one, Thomas Anderson aka Neo, played once again by Keanu Reeves. The film is having far too much fun playing with its own nostalgia and expectations from its audiences. From a wild performance from Yahya Abdul-Mateen II in a remixed and updated version of Morpheus to how the film works classic villains into the mix through new and old characters that arrive on the scene as Neo rediscovers The Matrix.


The familiar, both in iconic shots or in thematic nostalgia trips, is both shown to be revered and problematic in the film as it regularly uses a viewer’s expectations to challenge them. To say that The Matrix Resurrections will actively thrill and anger people is proof that its complexities are justifiably meaningful and the bold manner that Wachowski aims to use them drives the emotional reactions. As a villain so aptly coos at Neo, why are we so obsessed with facts and rules when fiction and feelings are what matter to the human existence? The Matrix Resurrections takes this to heart and throws so many of its own facts and rules out the window to double down on the fiction and feelings and it’s hard to consume. In the best of ways, naturally. Holding on rigidly to the previous films presents a problem and the film actively exploits that.

Granted, on its surface level, The Matrix Resurrections still entertains and uses its incredibly visionary moments to maintain its status as one of the most impressive eye-feasts in action cinema. Whether it’s the remixed opening that features one of our big new characters, Bugs - who showcases an incredible new rising star with Jessica Henwick, or a few low-key classic action moments like a brutal brawl on a train filled with Bots or a kung fu trial between Neo and Nu Morpheus, this latest entry still delivers on the thrills. The wire fu and hand to hand combat does miss the deft touch of choreographer Yuen Woo Ping and the spectacle is not nearly as grand as the previous two sequels, but there are moments where The Matrix Resurrections still manages to impress - including a finale with “bombs” that made me swear out loud.

To give too much more away might betray the experience of the film. It’s both daring and repetitive, but the manner that it whips between the two and pushes back against expectations of what a new film in this franchise should mean is delightfully refreshing. It’s not quite as epic as the other sequels and The Matrix Resurrections abandons so much of its philosophical monologues for the sake of stripping the series back to its core ideas will either work for its viewers or not.

At its core, this is a film about Neo and Trinity, their connection and the meaningfulness of it. The rest of the film with its new characters, plot points, or even the action set pieces all aim for that story and it’s a reminder of why this series was the redefining cinematic event 20 years ago.

Call it a reboot. Call it a sequel. Call it a reimagining of the series. It’s a resurrection and Lana Wachowski crafts a film that knows what it is and ably navigates all the expectations with a challenging smirk and a defiant laugh.

Welcome back to The Matrix everyone. It welcomes you.

Written By Matt Reifschneider
Posted by DarkReif at 12:39 PM