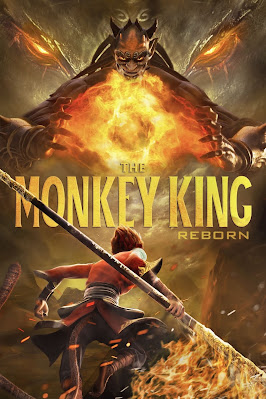 At this point and time, with the boom of the Chinese film industry still refusing to slow down, bolstered by the emergence of new avenues like straight-to-streaming and animation studios, it’s always good to know that there will now be an exponential amount of Monkey King movies to flood my viewing queue. I mean, there was already an entire industries’ worth that has already been released, but now there are further avenues to make even more.

The latest is the animated feature, The Monkey King Reborn, which is granted a very gracious US release via our friends over at Well Go USA on both DVD and Blu Ray. It’s not the first animated feature of the Monkey King to drop in the US, although I’d be hard pressed to find anyone that remembers Monkey King: Hero Is Back from five or six years ago (even with Jackie Chan voicing Wukong in the English dub). And, quite frankly, Monkey King Reborn may not quite find its American audience either.

A large part of me was hoping that it would be a kind of unique reimaging of the character like the previously released anime flick Nezha Reborn which dropped on Netflix in the last year or so, but alas, The Monkey King Reborn is far more interested in telling another spectacle-driven side story about our titular demon, Sun Wukong, as he and his troupe accidentally unleash an all-powerful demon and must fight against him and his new horde of baddies to save the world.

Full of fantastic character designs and settings, there is a visual fun and strength to Monkey King Reborn that deserves some praise. While the designs of the main characters, the classic foursome from the Journey to the West story which includes a benevolent monk, a peg demon, and a fish demon, were a bit underwhelming at first, the manner that the film surrounds them with intriguingly designed, colored, and executed characters and settings make up for it. It’s not anything revolutionary, by any means, but it serves its purpose to create a vibrant world. It’s obvious that the animators were in love with particle effects, but really, it looks fairly decent and that’s saying something.

Beyond that though, The Monkey King Reborn is a hodgepodge of various mixed efforts. The story, where Wukong ends up toppling a magic tree and unleashing one of the most powerful dark demons hell bent on conquering the earth, is par for the course in a fantasy story. Although, I will admit that the ‘manfruit’ that grows on the tree is particularly disturbing in its own strange way - as it looks like the characters are eating babies. I guess they’re fruit. It’s creepy. And it’s the reason that Wukong unleashes a demon? Doubly creepy. Read into that how you will.


From there, the heroes end up battling hordes of baddies, all too briefly, before taking on an elongated final battle with a demonic force and swirling black tornadoes. There’s some story with a new character, Fruitie - made of chi as we are reminded a million times, that works on a basic level to add some depth to the Wukong plot about finding a soul, but most of it feels like painted in emotional weight for the sake of progressing the plot to the next action set-piece.

However, the action is quite dynamic from a visual standpoint and there are a ton of fun cues for action fans to bite off regarding what The Monkey King Reborn is aiming to accomplish. The inconsistency of powers and the spectacle-driven third act tend to feel floaty and ungrounded to any realism whatsoever, but it’s no different than Superman flying around punching alien robot things. So, really, it’s the popular thing to do in a third act action set piece. It’s just the state of fantasy films right now. It’s not my favorite, but prior to the third act there are quite a few entertaining action set pieces.

All in all, The Monkey King Reborn is a fairly standard animated fantasy affair with plenty of colorful visuals and superpowered battles to satiate the cravings of all mainstream audiences. Beyond that though, the story can be both a difficult one to settle into for those unfamiliar with the Journey to the West lore and it’s not deep enough to say anything refreshing about the long-standing characters or their plights.

In a world where there’s a new Monkey King film generated every six months, The Monkey King Reborn tends to fall flat in the middle. It’s entertaining enough with its quirks, visuals, and gag-inducing ‘manfruit,’ but it’s nothing spectacular. With so many options for this story, there are others to find and discover first over this one.

Written By Matt Reifschneider
Posted by DarkReif at 4:11 PM