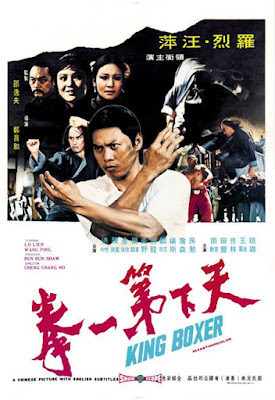 King Boxer, or as it may be more widely known in the US as Five Fingers of Death, is such a seminal kung fu film in the history of cinema that it absolutely had to be the first film featured in this latest boxset from Arrow Video, Shawscope Vol. 1. Now I won’t review the film in whole here, as I have said what I had to say over in an article on the impact and strength of the film at the 36 Styles website (link below for those interested), but I did want to make mention that it’s one hell of a way to kick off a box set.

Not only is this the best the film has looked in release in the US, although my Dragon Dynasty DVD certainly holds up, but it has a ton of fantastic features worth mentioning. In particular, the Tony Rayns commentary about the history of the Shaw Brothers studio as it led up to the release of King Boxer - including a fantastic discussion on its director, is one of the highlights of the entire box set.

It also features a slick little documentary about the Shaw Brothers studio, the first of three parts, that covers a ton of ground and is a nice feature to add to the mix. A plethora of interviews, alternative titles to feature the US titles, and commentary by David Desser cap off the features and all of them are worth the examination if you are cinephile - and not just ones interested in kung fu.

As mentioned, if you want to read my full review of the film, please visit the 36 Styles website here: