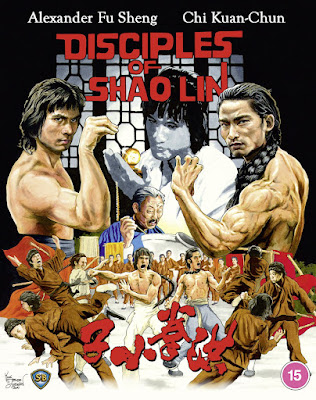 There are an epic amount of kung fu movies that start off with a demonstration of the martial arts that will be shown in the upcoming film, performed in front of a starkly colored backdrop. It’s a commonplace occurrence in many of these films, particularly from a specific time period, that fans of the studio’s output will be familiar with.

With Disciples of Shaolin, there is a specific tone to how the film starts in this style. The bright yellow background allows a shirtless Alexander Fu Sheng to pop, as he runs through a series of kung fu movements. There is no score. The sound of the metal rings on his arms clank and jingle. His face is dour and intense. He moves to practice on a set of Shaolin poles as a soundtrack finally sneaks in for the last portion.

This routine carries on for almost five minutes before the film leaps into its main story, following a bullheaded and cocky young fighter, played by Alexander Fu Sheng, as he attempts to make a name for himself on the hard streets while befriending another mysterious fighter played by Chi Kuan-Chun.

There is an intensity and seriousness to this opening sequence that feeds into the tonality of writing and direction that makes Disciples of Shaolin one of the best of director Chang Cheh’s ‘Shaolin era’ for the Shaw Brothers studio. Like many of the other films in this loosely thematic series, this 1975 kung fu classic has a lot to say about its characters and it does so in such an effective way that its writing and dramatic punches often outweigh its more entertaining elements. That’s a hell of a statement when referring to a kung fu film of this caliber.

The core of what Disciples of Shaolin is saying thematically stems back to many of the classic character and narrative tropes that Chang Cheh loved to utilize. Brotherhood, social justice, revenge, and tragedy for those involved in any of those themes all lift the plot up. When our hero, played by Alexander Fu Sheng while delivering one of the best performances of his unfortunately short career, is faced with a system that continually exploits him, he will eventually have to fight back against the shackles to free himself. Whether its character choices in his obsession with his shoes as a social status or the repeated use of watches and clocks to indicate a ticking time until his world collapses, Disciples of Shaolin embeds solid character work with a tragic and dramatic story that works in spades. 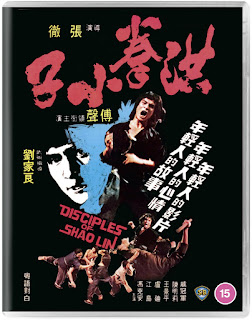 To say that this film solidifies Fu Sheng as a powerhouse actor might be an understatement. His performance is lovable and mischievous, dedicated and comedic at times and his presence is the reason that any of the themes and action sequences work. His increasing cockiness as his status grows in the town may be a trope of the hero’s journey, but director Chang Cheh guides the tonality and performance by Fu Sheng in a manner that feels dynamic and connective with the audience.

While the film is strangely titled Disciples of Shaolin when there is only assumed Shaolin aspects to it - including the overall mystery to where Fu Sheng and Chi Kuan-Chun learned their impressive kung fu skills, the action is impressively choreographed and executed. As expected with most Shaw Brothers flicks. Although the latter actor, Chi Kuan-Chun, only gets one true fight at the very end of the film and it’s hardly the best of the film, Fu Sheng gets to show off his abilities here with relative ease. Mostly working in a one-on-two-dozen series of fights. Fu Sheng and Chang Cheh tack in a bit of comedy, not as a tone setter but as a character trait, and the balance between sheer ass-kicking and the character/plot driving mechanics works with the force of rapid fire punches from the iconic hero.

Disciples of Shaolin is not the flashiest of the Shaw Brothers films and not even the most spectacle-driven of Chang Cheh’s Shaolin era, but this film has such a strong sense of character, narrative, and thematic layering that it might be one of the best. Remade later on by the Shaw Brothers studio with Johnnie To at the helm and Aaron Kwok in the lead as The Bare-Footed Kid, it’s obvious this film has a strong story-driven foundation and for martial arts fans it’s a must-see, must love, and must own film.

Particularly now that it’s been unleashed on a beautiful new Blu Ray courtesy of our friends over at 88 Films in the US with two commentaries and a fantastic restoration.