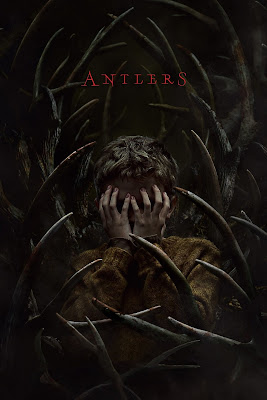 Back in early 2018, Guillermo del Toro made a phenomenal speech after winning the Golden Globe for Best Director. He spoke about how his dedication to telling stories about monsters was driven by their meaning beyond scares and fear and how their representation of our flaws as the human race made them incredibly provocative and meaningful.

With a speech like that, it’s not shocking that most of the films he produces, even when wavering in quality, tend to aim for that same layered storytelling. That’s why when it was announced he would be producing the Scott Cooper-directed horror film, Antlers, it was hard not to get excited. Unfortunately, a pandemic and some studio delays made sure that the film didn’t get released until the latter part of 2021 for the Halloween season, but strong trailers and an interesting combination between producer and director crafted one of the most hyped films of the year.

Unsurprisingly, I suppose, audiences and critics panned the film.

Antlers does represent an intriguing mixture of balancing and tones underneath a film that is both perhaps too mainstream for the A24 crowd and too vaguely layered in its offbeat artistic choices for the mainstream crowd. It walks an achingly wound tightrope of expectations and the results were going to disappoint at least one of the two sides of the audience it was aiming for. However, Antlers is hardly the tragic misfire of talents that so many of its critics and fans claimed it to be. While it does make a variety of perplexing decisions with its material, there is such a daunting and haunting undercurrent of its themes that deserves far more credit than it was given.

As the film follows its main characters, led by schoolmarm Julia and her local sheriff brother Paul, it does play itself on two levels. The surface level is the classic “nature fighting back against the grievances of man” where a Wendigo is unleashed upon a small town in Oregon due to the results of over-foresting and mining. Julia, played with the now natural ability of Keri Russell to feign confidence and capability over a traumatic character’s past - mostly likely refined by her stint on The Americans, starts to investigate a young boy in her class who she sees signs of domestic abuse. It doesn’t take long to escalate as the Wendigo the young boy is trying to keep at bay, releases its fury at people in the small community.

For this level, Antlers hammers into the formulas of the creature feature in some interesting ways. The film avoids showing the ravages of the incidents on the town as a whole, avoiding some of the cliches of the townsfolk up in arms about murders or disappearances, and instead focuses on the tale of the two main families - that of Julia and her brother and the young boy tormented by the Wendigo. Cooper cakes the film an atmospheric visual fog, utilizing impressive cinematography to create a fairytale-like tonality to this story. The performances are impressive enough between its three leads - strongly using Jesse Plemons to balance out Keri Russell in a thematic way (more on that in a second) and benefiting from a screen stealing performance from Jeremy Thomas as the young boy, Lucas, which garners an uneasy relationship with film’s viewers in his blank, vaguely sad eye acting and emaciated physical performance.


It’s ultimately an intimate film in how it approaches its story, something that doesn’t necessarily lean on the spectacle of its monster that people might have been expecting, and it tends to leave a lot of its backstories and explanations vague and subtle. At times this can be frustrating, particularly how the film leans heavily away from the Native American roots of its creature and only brushes by those in a way that feels like it might have been a studio note on the script, rather than a fully realized thematic element. Yet, it’s hard for me not to buy into the larger choices that Cooper is making for its narrative and the overall creature feature of its surface story. It’s enough to capture my attention with some strong visuals and entertaining horror sequences that build on the accumulating dread of its mysteries around the Wendigo.

Yet, it’s the thematic elements and allegories that are the reason Antlers hung with me long after its credits had rolled by. It should be notable that the film brushes along a slew of various themes from the previously mentioned resource mismanagement or the Native American lore, but it also touches on a couple of key ones with the human condition like alcoholism or addiction and the circular cycle of domestic violence. It’s in these latter themes that Antlers thrives. The manner that it ties these thematic ideas into the Wendigo lore and how the characters interact lifts the film above the usual creature feature material. There’s a lot to chew on in these portions and it’s worth noting for its layered approach to the material.

Perhaps Antlers was just a film that could not live up to its own hype created by its strong marketing and balancing act between cinematic approaches. At least in the public’s eye. Its allegories are layered in multiple ways and its tale of a creature is far more concerned with its themes than consistency in narrative.  That’s the trick of the film, ultimately. Its unique choices and bold topics are not necessarily in the best balance, but it's through those choices that Antlers finds its voice - in between the styles and in between the tones.

Written By Matt Reifschneider
Posted by DarkReif at 8:13 PM