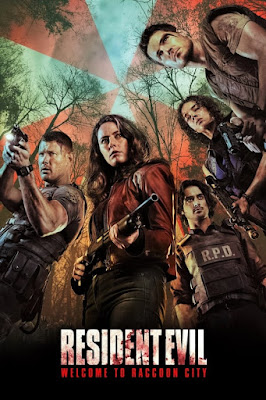 After grossing an insane amount of money and making it one of the biggest box office horror franchises of all time, Sony wasn’t going to take long to reboot the Resident Evil franchise. It’s not like Sony has a lot of load-bearing franchises to begin with under their belt and letting this one stay dormant for too long would be asinine.

To their benefit, this reboot of the long-running video game series does go back to the source material roots and away from the Matrix-knock-off action meets the inescapable silliness of Paul WS Anderson throwing random shit at his audience. Resident Evil: Welcome to Raccoon City, while still sporting one of the worst titles I can think of in recent history, is a fantastic idea on paper. Go back to the horror. Go back to the much-loved characters. Go back to the fear that the Resident Evil game series used to launch an entire subgenre of gaming.

It’s a shame that Resident Evil - I refuse to use its full title from this point on - is a middling effort.

While the film is relatively mediocre, it should be noted at this time that Resident Evil is, in fact, one of the best and most competent films of the entire live-action cinema catalog. It doesn’t take much and the trauma of seeing Resident Evil: The Final Chapter certainly haunts me to this day, but that should be noted that even for all of its flaws, this film is still attempting to do something other than flaunt around Milla Jovovich in role-playing outfits while CGI threats swirl around her. Not that the previous films don’t have their place in vulgar auteurism, but at least this recent incarnation is attempting to tap into what made the games so popular.

Following an ensemble of individuals in Raccoon City, Resident Evil starts with Claire Redfield, played with various stern looks by Kaya Scodelario, as she returns to the now mostly deserted town to find her brother and uncover a larger conspiracy by the diabolical Umbrella Corporation. Unfortunately, on the night she returns, an outbreak has occurred. As the STARS police unit with Chris Redfield go to investigate the Spencer Mansion where a few incidents have occurred, Claire will team up with a local police rookie Leon to try and survive the increasing hordes of zombies in the city.

As a long-time fan and player of the Resident Evil games, it’s fun to see Johannes Roberts tackle the original plotting and characters of the games. The film intends to remix the first two games into one film and add in enough of the backing lore and mythos of the other games to create the foundation for an entire franchise. There is a reveal in the third act that references one of the later games, but I won’t spoil that here. Just know that a better title for this film would have been Resident Evil: Remix for its intentions on laying the groundwork for a new franchise while still giving the fans what they have been asking for since day one with the other films.


The attention to detail in recreating key moments for fans, whether it's the visual of the first zombie appearance in the mansion or the use of the phrase “itchy tasty,” is admirable. The remixing of elements, which are not necessarily pulled directly from the games in whole, makes Resident Evil a relatively fun watch for the fans. Although the dialogue can be stilted and clunky, not unlike the original games, there is a sense that Roberts and company understand the appeal of the games on a base level and attempt to replicate that on screen.

Unfortunately, while the intentions are great in recreating these tones and feelings that made the games pop throughout the late 90s and early 00s, they don’t necessarily translate to the screen in a provocative way. The plotting gets wholly overwhelming as it attempts to jam two plus games into a single film. It dilutes so many sequences and undercuts the development of damn near every character. It forces its way through the most of the key moments to make sure they all fit. The plot with the film’s “villain”, Birken played with the usual pop by Neal McDonough, is an afterthought to get the film to the CGI heavy finale, and a storyline with the Raccoon City Orphanage feels so undercooked that I can hear a head chef yelling in the background to throw it back on the grill as its unfit for consumption.

Even the performances, which wildly range from moment to moment, seem far more interested in recreating that tone and feeling than necessarily embedding a humanity and depth that might have benefited the film. Yes, it’s obvious that Claire and Leon remain two to the most popular characters of the series, but creating the dual plotting between Claire and Chris Redfield, the latter played by Robbie Amell, attenuates the experience and Resident Evil desperately needs more time to develop relationships and characters to get audience buy in. It’s just not there. It’s a film that runs through the narrative and plot motions to get in those key moments for fans and it’s a significant problem.

With all of that being said, from the wooden performances to the problematically overstuffed script, there is one aspect to Resident Evil that had me hooked from minute one. Like so many of the other films directed by Johannes Roberts, this film has a visual tone and feeling that totally understands the inspirations for the Resident Evil games. Not just the games themselves, but the style and references that the games borrowed from previous decades of horror cinema that came before it.


If I’m not mistaken, which is often to be fair, I would be tempted to say that Johannes was trying to bury a 1970s Italian horror film into the middle of this flick. It’s not a stretch to see that the original games pulled inspiration from the likes of George A. Romero and Lucio Fulci, but this cinematic rendition directly brings those influences to the surface.

From the designs of the sets and creatures to the manner that Roberts shoots the film with slow zooms and how he lights everything in odd glowing lamps in the darkness, Resident Evil has this intriguing blend of modern and old school horror styles that will immediately provoke an emotional response for long time horror fans. Whether those choices are successful can vary from viewer to viewer, but for me, some of these directorial intentions easily made the film watchable and entertaining. Enough so that as the film came to close, I had to wonder…

...were all of those perceived problems in the performances and narrative flow active choices by the director - who also wrote the film - to reflect the history of the Resident Evil brand by including the influences that went into the original concept? If so, is this film secretly one of the more interesting films of the year in recreating its influences in a way that’s not in an obvious meta way? Is Resident Evil an homage to a bygone era with all of its warts without the winking that we’ve become so accustomed to?

Still, Resident Evil: Welcome to Raccoon City (sigh) is a mixed effort. The intentions and concepts are all there, but the execution of making those choices work on the screen are a hodgepodge of successes and misfires. There’s a lot to enjoy about the film in its visuals and the lunacy of how quickly it has to maneuver itself to fit in everything from a plotting perspective, but the lackluster character work and some budgetary strains ultimately leave Resident Evil feeling a tad hollow. It’s a fun film, but hardly the landmark reboot that maybe necessary to relaunch the brand cinematically. Still, with the benefit of the doubt, it's still one of the better films of the series.