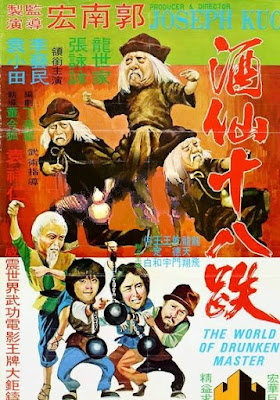 In the martial arts cinema landscape, one could easily argue that there are films “pre-Drunken Master” and “post-Drunken Master.” Not only in the general combination of kung fu and comedy but in the sheer amount of knock-offs that arrived on the scene after the massive success of the Jackie Chan and Yuen Woo-Ping masterpiece. Although there are plenty of forgettable ones, there are also a handful of these films that impress on a surprising level. And then there are those films that fall right down the center - like The World of Drunken Master.

Featuring some of the same kung fu comedy as its namesake would imply, this cult classic of the genre does a lot of things right and then promptly follows them up - or proceeds them - with some baffling choices. As a whole, it’s hard not to love the sheer entertainment present in the film with its relentlessly paced latter half and strangely long developing character work of the first half, but it’s also a film that doesn’t quite reach the loftiness of the originator.

If there is one thing to say about The World of Drunken Master, it’s that the film can be rather ambitious with its narrative. Even if it’s problematic. The film is bookended by the story of two old fighters, one of which played by fan favorite and frequent Joseph Kuo collaborator Jack Long, of which one is being hunted by various assassins looking to grasp a bit of vengeance.

Although this portion does feature some fantastic drunken boxing and Jack Long is always welcome in any film, it’s relatively tacked on for the sake of essentially combining two films into one plot. Random characters pop up, some even mid-fight, and the ties to the main portion of the film - a flashback to the drunken boxers as young men learning the style, is loose at best. Granted, it’s not nearly as random and tacked on as the opening sequence that explains drunken boxing while a cameo from Simon Yuen, the original Drunken Master himself, does some kung fun on the beach, but it’s not as cohesive as one would hope either. 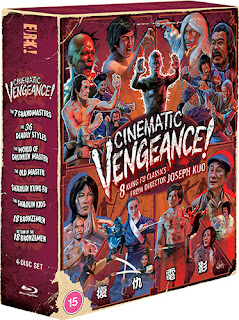 The majority of The World of Drunken Master is told in the past, through an elongated flashback about two men who in their young arrogance and competitiveness, end up disciples of a drunken boxer who runs a winery. The plot runs through the motions of how they sleight some villains and end up in a life-or-death situation with their makeshift kung fu family and it rarely rises above the basics. Still, director Joseph Kuo knows how to shoot and pace these kinds of films and the rather impressive performances help out immensely. I will still stand firmly behind the charming star power of Li Yi-Min and the appearance of both Jack and Mark Long add some gravitas to the proceedings.

The true highlight, as might be expected in a film of this ilk, is the action choreography. Joseph Kuo is no stranger to creating some of the best martial arts films and sequences outside of the major studios of the time and once again this film soars in this capacity. There are plenty of memorable series of kung fu matches that whip around with complex choreography and rapid-fire pacing and it’s the big reason why this film has endured as a cult classic. The martial arts director of the film is the often overlooked, but incredibly talented Yuen Cheung-Yan who worked as an action director or martial arts director on over 100 films with some incredible titles to his credit. Not to mention, he directed the bat shit, fuckin’ insane Taoism Drunkard. So, you know this film has some fantastic stuff in it.


The World of Drunken Master eventually succumbs to its own generic plotting and muddied character and narrative flaws, particularly in its supposed love triangle that is meant to leave the audience shocked and saddened in its third act, but it’s a damn fun ride through it. Say what you will about its blueprint formula, spun to be ambitious by way of a dual narrative, but the combination of screen presence, actors that seep charm, and some incredible choreography make The World of Drunken Master quite the entertaining watch.

Of the Drunken Master knock-offs and cash-ins, it’s not the best, but it’s one that contains just enough talent and piss n’ vinegar to warrant multiple watches.