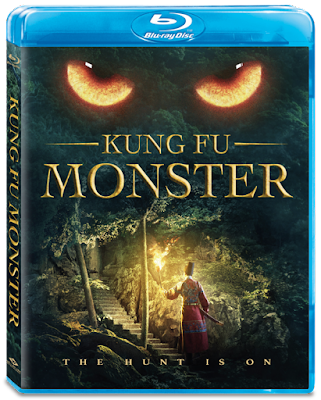 Foreign cinema can always have a feeling of being off-kilter for those not used to the style, tropes, or storytelling techniques of different industries from various eras. Initial trailers made Kung Fu Monster look scattered and perplexing, despite some talent and intriguing elements to it. However, as a wuxia fan and being open to the tonal whiplash that Chinese cinema occasionally uses as a narrative identity, I was happy to see what this film had to offer. With that in mind, it’s best to know that Kung Fu Monster is fuckin’ weird. It’s a genre-bending exercise in being a comedy first and a fantasy wuxia second with some other elements tossed in for good measure. When the tones and styles are working in conjunction, the film can be relatively enjoyable and highly entertaining. When they don’t, it’s as scattershot and perplexing as my initial fears for the film would indicate. Judging from the family comedy element meets fantasy wuxia from the director of The Guillotines, I probably should have known it was going to be a wild card.

The story is a fantasy slanted wuxia where a powerful military guard, played by a somewhat disengaged Louis Koo (at least he’s not sleepwalking through it like he does through the various Storm films), sacrifices his career to save a small monkey/dog monster from an evil Eunuch who wants to use it as a weapon. A hodgepodge of various martial artists, who team together to steal some silver, find the captured rogue guard and the titular Kung Fu Monster. Naturally, that means they team up to fight against the villain.

That’s essentially it when it comes to plot. On the surface level, it’s entertaining enough. The characters are all broadly drawn and colored tropes mixed with absurdist humor. The plot is just outlandish enough to support the full comedic tones of the foundational pieces, even if 80% of the comedy falls flat as either slapstick or half-hearted awkward punchlines. The first half of the film is solely dedicated to introducing its ensemble cast with a variety of set pieces and big comedic moments while the second half is mostly located in one key location - one major room in an abandoned temple where the characters come together to execute a couple of schemes and face off against the pale villain. There are plenty of chi powers and some wuxia fight sequences to satiate the action fans, but keep in mind this is a comedy first. Most of the action is either played for a punch line or to showcase a bit of the poor CGI that continues to haunt Chinese cinema. Some of it works, including a white-browed henchman who keeps getting stabbed with throwing knives that really works as the best moment of humor in the film, but most of the film struggles to find a balance between the genres. In fact, the film often plays against its childish humor with some shockingly dark and violent material or the swearing that pops up in the subtitles. Not often you see F-bombs dropped in what might have easily been a family comedy, but I digress. That's just the strange and weird tone of this film.

Despite the absurdity of all of the childish humor, Kung Fu Monster makes one incredibly strange choice. It doesn’t use the titular monster nearly as much as one would assume. For the most part, this poorly animated creature serves as a plot device to set up Louis Koo’s character and to work as a deus ex machina in the third act. He is privy to a couple of action sequences (a relatively pointless one in the second act where he makes Chewbacca noises and just kind of does his thing to set up the finale) but most of those look like incredibly poor video game sequences and really don’t add much to the film besides soulless spectacle. If anything, Kung Fu Monster might have been better and more efficient without the creature.

Even though the film has incredible problems in maintaining any kind of coherent narrative pacing, tonal standards, or real comedic thoughtfulness, there is a style and fun to it that can’t be outright ignored. It’s weird. Really weird. I have to give it credit that I was never bored with it as it would randomly break into a musical sequence, flying lightfoot rooftop chase, or full out CGI monster mayhem at the drop of a pin. The cast seems relatively game for all of it, no matter how awkward or generic it could get at times for its characters and that says something. Kung Fu Monster could easily garner a cult audience with time, for all of the reasons above, but for now it feels like an uneven cinematic experience that is likely to baffle most viewers - even those with an open mind.