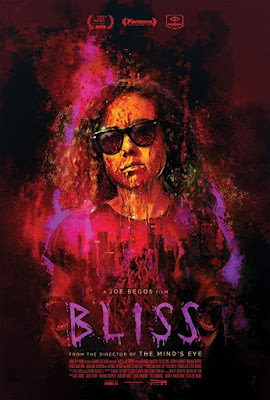 As a horror film fan, I’ve always had a soft spot for director Joe Begos. He has a phenomenal knack for creating throwback horror cinema in a way that is not playing its style as a gimmick as much as a love letter to the bygone eras of classic horror. When a debut is pure John Carpenter meets early David Cronenberg, as is the case with his film Almost Human, the filmmaker will end up on our list of people to watch. Although it seemed like his career had stalled out for a hot minute after his sophomore effort, Begos is back with TWO films this year. Both films immediately made my list as ‘must-see’ for the year and the first of the two, Bliss, finally dropped on VOD for consumption. Bliss is an intriguing film. It’s incredibly low budget, but it’s obvious how much Begos has grown as a filmmaker. The film certainly pulls from the past, once again as a stylistic choice, but Bliss is exactly the horror experience that its title would indicate - it’s fuckin’ Blissful in its drug-fueled, fever dream analysis of the grimy subsect of Los Angeles. It delivers on that experience with the gusto of an artist looking to capture the angst and intimacy of creating art and, while the film goes to some wild places, features a rather personal tone to it that uplifts the entire event.

Like many films that have struck a chord with modern audiences, there is an artistic sense to the entirety of Bliss that cannot be ignored. At the core, this is a film where a struggling artist turns to drugs to break her “block” on finishing her big piece for a gallery and quickly ends up spiraling into a vampiric territory of insanity. Running at an incredibly brisk 80 minutes, Bliss never overstays its welcome and knows that with its limited budget there is a necessity to be artistic to convey the story it wants. It does not have the time or resources to dedicate to too many outlandish or large set pieces, so it righteously focuses on the central - and mostly intimate - battle within our struggling protagonist. The hidden weapon within Bliss is actress Dora Madison. Although there are a handful of fantastic performances from the supporting cast, this film is carried on the shoulders of its lead and she delivers an incredible performance that takes the character study focus of her self destructive nature and makes it a fantastical and neon-soaked journey into the various levels of hell in the underground LA art scene. She is, to put it lightly, a weapon in this film.

The rest of Bliss is Begos slathering it in both a subtle sense of genre plotting and a demonstrative fever dream atmospheric aesthetic. If the balance between those two had any disconnect, Bliss would have imploded. This is not the case though. The plot uses the vampires and horror elements as a narrative choice and builds a ton of its atmosphere around the modern art scene mixed with a drug-induced trip. If an audience is expecting tons of classic vampire material, this might be a disappointment. It’s not until the third act that the vampire element really takes hold. When it does, you can expect a bit of a blood bath with tons of practical effects and a raw energy (made even more effective by the 16 mm film it was shot on), but the film is all about setting up the characters, the themes, and the style for the majority of its run time. That way when the violence hits, it is unrelenting and hard.

Bliss is easily one of the best genre films of the year. It’s low budget and raw feeling inspires comparisons to the early works of Abel Ferrara, particularly in how it blends style with extreme genre elements and still manages to feel like an arthouse grind film. With a meteoric lead performance, some solid practical effects, and a suffocating color blown visual style and atmosphere, Bliss is the best of Begos’ career. At least until we see what he has to offer with VFW later this year.