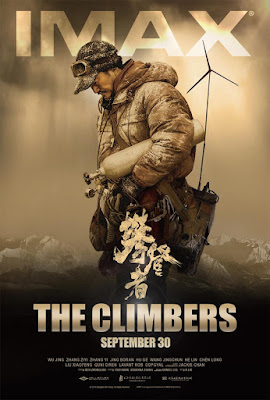 China’s attempts to be the next Hollywood are only getting larger. Whether it’s big-time disaster films, comedies, or science fiction (and to some extent all three at once in the blockbuster The Wandering Earth) the industry is hellbent on taking inspiration and attempting to out-Hollywood Hollywood at its own game. The Climbers is a product of this mindset. This film exists to a) be a huge action-packed and dramatic blockbuster to draw in audiences with its stars and big-name talent and b) as continued jingoistic propaganda for China. For all of the hype around Wu Jing teaming up with director Daniel Lee to tell the story of the Chinese expedition in 1975 to crest Mt. Everest, it’s almost fitting that the film ends up as a gigantic mess. It tries incredibly hard to be everything a major blockbuster film needs to be as a huge four-quadrant success and, unfortunately, lacks the balance of pacing and tonality to fit it all in there. There are a handful of things to respect in how The Climbers approaches its material, but for everything it does right, it makes a half dozen choices that don’t work in obscenely baffling ways.

Taking place over a variety of decades, The Climbers tells the story of Fang Wuzhou (played with some impressive gravitas by China’s big A-list star, Wu Jing) and the various mountaineers who attempt to be the first Chinese team to climb Mt. Everest from the north side. The plot bounces from character to plot to character and jumps forward a decade after the “cold” open in a loose use of narrative. Make sure you’re taking notes for the test at the end about how awesome China is at overcoming massive obstacles to be better and “more” right than anyone else. While the film attempts to cover a lot of ground with its ensemble cast and decade-spanning story, the narrative is played so loosely that it never gains any real momentum. There are key moments that work here or there, but the pacing is the biggest obstacle that The Climbers must overcome as it pinballs from drama to humor to action to humor to drama in seemingly random order and never finds its footing to balance it all. Partner that with some of the most baffling editing and leaps of time and more often than not the film ends up being a chore just to piece together for an audience than a truly harrowing and heroic experience as it is presented.

To its benefit, Wu Jing easily anchors the film. He brings a sense of true dramatic weight to the proceedings even with a relatively thin romantic subplot where Zhang Ziyi is doing her best to give layers to a relatively hollow and undercooked character. However, The Climbers is (more or less) an ensemble film which only adds to the pacing issues as indicated above. Although Wu Jing, Zhang Ziyi, and Zhang Yi are desperately bringing their A-game to the film when needed, the rest of the cast struggles to find their voice in a film that never gives them a lot of time to do so. A romantic subplot for a young climber and his ascent up the ranks feels formulaic and hammered in while another plot with a medical doctor and the second in command also feels like padding for a film that desperately needed a trim. The idea is solid, showing the unity of the group and how they care for one another to accomplish the gigantic task on hand, but the execution - even on a performance level, is scattershot at best.

This all culminates in trying to understand why Daniel Lee was chosen to direct the film. On paper, it makes sense. He’s incredibly popular. He delivers a variety of crowd-pleasing films with some of the nation’s biggest stars like 14 Blades with Donnie Yen, Dragon Blade with Jackie Chan, or Black Mask with Jet Li at the beginning of his career. However, his style is often at odds with the dramatic nature of this film. When the film kicks into outlandish action set pieces where ladders become key devices of survival as sleds, roaring winds practically steal people from the group, crevices act at excuses for superhuman leaps of fitness, and people sliding to potential death happens every 15 minutes or so, he delivers on eye-rolling gimmicks and thrills that had my theatrical audience hooked. Even in those moments, questionable CGI and incredibly cheesy execution of the thrills feels tacky and lacks the emotional gusto needed to sell it. The major problem is how those only serve as entertainment and do not have the sense of consequence that a life or death situation should have even in the cinematic world of this “based on a true story” film. With all of the flag-waving propaganda that’s being fed to the audience, there is never any real question that the team will succeed and if a character meets a tragic end, they will receive a hero’s welcome. There’s no real human conflict here. It is man vs nature and man will succeed even when he doesn’t. Why did they hire Daniel Lee again?

The Climbers has moments where one can see why this story could work as a blockbuster action drama, but this version of the film is so loosely scripted, executed, and presented that it’s a wonder how it made it through with so many insane choices presented on-screen. Wu Jing is a flash of brilliance in the film, as are some key moments of introspective character work from the three leads, but the rest of the film has no idea how to manage a narrative, tone, or pace. If one is in the mood for pure nationalistic and heroic propaganda with some outlandish action set pieces and hammy attempts at emotional punch, then The Climbers may work for you. For this reviewer, it left me stranded in the cold.