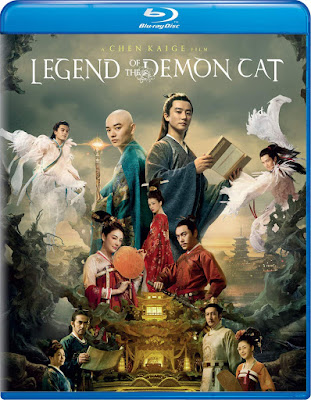 When the trailer for Legend of the Demon Cat originally dropped, there was a skepticism that came with it. The film looked to be a strange tonal balance, genre-hopping moment to moment and coming off as more of a gimmick than expected. Of course, this is something of a normal thing for Chinese cinema. When the film started garnering some awards attention, especially from the Asian Film Awards, my interest immediately piqued. Naturally, that excitement faded as the release of the film gestated for a long time before its US release from Well Go USA.  With its Blu Ray release now on store shelves, there is going to be an interesting reaction to Legend of the Demon Cat. It’s a bold classic fantasy tale Chinese mythology, ripe with mystery and some truly poignant imagery, but it’s also a film that often does not pander to more casual film fans. It’s an emotionally powered story first and foremost and will, in a shocking way, actively lean away from its genre conventions. For that choice, the film deserves a lot of respect, even if it ends up being more of a drama with fantasy elements than vice versa.

Coming from director Chen Kaige, one’s expectations should have automatically moved into dramatic territory. While he has produced his fair share of intriguing films throughout his career, most notably the Palme d’Or winner Farewell My Concubine or 2015’s highly entertaining Monk Comes Down the Mountain, there was a sense that perhaps this would be him leaping into horror-tinged territory. That’s a fascinating prospect. However, outside of the first portion of the film, this really isn’t that much of a darker genre film. Instead, Kaige attempts to take its darker opening material, where a Japanese monk and a poet team up to unravel mysterious deaths linked to a black cat and uses it as the launching pad for a more subdued and melancholic drama.

This is where The Legend of the Demon Cat both impresses and disappoints. After its initial set up, which features a few very visually slick sequences of a “deathly possession” and a cat vs entire room of people, the film careens further and further into its mystery plot, eventually culminating into a back half that is almost completely a flashback. It’s a bold choice, to explain the mystery through extensive flashback sequences that are essentially an entirely new story and take up most of the rest of film, but the manner that it is meant to parallel the initial premise takes a back seat to the dramatic and fantastical narrative. Entire new characters, dynamics, visuals, and tones are added at this point. The narrative is actually quite good in these sequences, but the tenuous connections and eventual dovetailing back to the set up falls flat. Quite frankly, the film ends up feeling like two films being jammed into one.

Legend of the Demon Cat is also sold on its visuals, as indicated by much of its award season presence in China, but the execution is hit or miss. The CGI can be grandiose and beautiful one second only to implode into cartoonish moments that feel in juxtaposition to the rest. When the action and fantasy start to happen, the film showcases some of its genre power, but after the initial set up it’s obvious that Kaige has no intention of following through on those moments and instead just powers through into the drama. The drama is great with phenomenal performances all around and some key emotional depth to the story that’s unfolding that certainly had my eyes welling up in at times, but the rest of the film tends to meander around it - wanting to hit its audience with genre elements, but rarely embracing them in a way that could have made a more interesting film overall.

That’s the gist of Legend of the Demon Cat. It’s a film that promises some unique shifting tones, genre elements, and intriguing mysteries, but it ultimately plays out like a more subdued dramatic ensemble film. Kaige certainly has a handle on both, delivering some fun sequences to kick off the film and some melodramatic and romantic fantasy heft on the back end. The two just do not mix and the whole ends up being less than the parts. For Chinese cinema fans, Legend of the Demon Cat presents a rather intriguing experience, but one that does not capitalize on its premise.