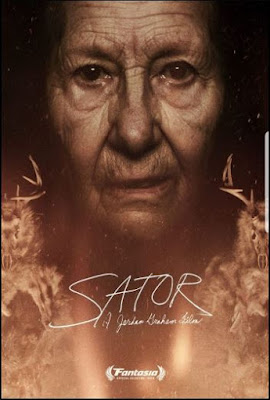 With the advent of various technologies that allow filmmakers to do things quicker, cheaper, and on their own laptops, perhaps it’s not surprising that the man behind Sator, Jordan Graham, essentially made the film on his own. Director, writer, music, production, and in a relatively candid interview after the first screening of the film at the Telluride Horror Show film festival, he casually mentioned that he built the cabin set of the film with his friend. To say that this film is, at its core, the result of one man's pure will power might be an understatement. The fact that it’s a rather impressive display of arthouse horror is what makes all of the mentioned work by Mr. Graham even more fantastical. Playing with naturalistic horror in a way that begs the question on why A24 hasn’t picked up the film yet is par for the course. The minimalistic approach to most of its plot and narrative can be both frustrating and fascinating. Sator is an intimate film with visual style seeping off the screen and an up-for-interpretation through-line that will certainly appease the horror fans looking for one of those slow burn arthouse horror flicks.

Very quickly, Sator makes use of its realistic tone and feeling. The film, on a narrative level, uses a widescreen and full screen formatting throughout to indicate a change of narrative intention. The full screen is a mixture of home videos and candid interviews of an elderly woman, Nani, explaining her past of automatic writing and, as the film progresses, the strange relationship she has with her “guardian,” the titular and mysterious Sator. She essentially sets up the mythology of the film, where a cult of fur and animal bone laden individuals (real or not and listed as Disciples of Sator in the credits) start to appear to the woman’s grandson, Pete, who has decidedly cut himself off from the world – and to a smaller extent his family – by moving out to the woods in a small cabin on his own. Sator is Pete’s story and his isolation, fear, and lacking purpose drive the narrative and emotional themes of the film.

Although all of that above certainly sets up the plot of the film, Sator is not really invested in a plot. It’s invested in the narrative. Not the why things happen in the order they do, but the manner that it’s shown onscreen and resonating emotionally with the characters and vicariously to the audience. The meticulous pacing of the film partnered with the naturalistic and minimalist approach to storytelling can be difficult for a viewer. Backstories and familial relationships are only loosely drawn together while the actual onscreen horror doesn’t really arrive until the third act with hints at the supernatural elements in the majority of the film. What Sator does succeed at is crafting such a dense and natural sense of existential dread that it’s hard not to hold one’s breath as they are attempting to piece together the film's parts and figure out what is going to happen. Those hints at something more sinister and powerful make for some fantastic sequences, including the discovery of a woman tied to a tree at night that results in a quick but shocking chase sequence, and director/writer/producer/man-at-arms Graham ably navigates most of the pitfalls of his choices. The visuals are often striking, the performances are allowed to breathe and settle in the character beats, and the culmination in the third act is at times surprisingly violent and yet melancholic.

Sator is going to be a film that ultimately divides horror fans. It’s arthouse and minimalistic approach to setting up its story and executing it will undoubtedly leave more casual horror fans bored or disconnected from it. Like many films of this variety, Sator requires its audience to give in to its style and work at putting the pieces together themselves. The unanswered questions certainly nag after the film’s credits fade, but it’s a film that does linger. The visuals and emotional weight of it carry it further than expected. Here’s to hoping that some studios see the heart, intimacy, and talents of Jordan Graham and give him a bigger budget to complete his next feature. If this is what he can do with his own two hands, imagine what the future holds with some financial support and the talents of other strong creative voices.