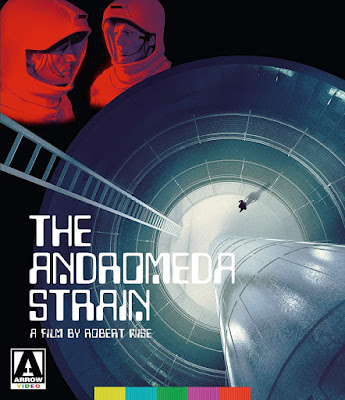 The Andromeda Strain has always held a special place for me as a film. Growing up I was obsessed with the author Michael Crichton. After seeing Jurassic Park and I went back and read all of his books. His ability to be completely scientific within the realms of fiction writing was a style of writing and thoughtfulness I had never experienced before. The Andromeda Strain was one of my favorite novels. It was intense and detailed. Even though the book was well over 30 years old at the time I read it, it shook me with its realistic approach to apocalyptic procedures and space contagions. When I first saw the film, I couldn’t finish it. I wanted to, but ten-year-old me just wasn’t able to do so because I would fall asleep every time. I wanted to love the film, but the translation from the book to the silver screen was not necessarily the most exciting thing in the world.

Now it’s 2019 and Arrow Video has decided to tackle the infamous 1970s science fiction “thriller” with the usual gusto that they approach all of their titles with. It was a prime moment for me to revisit the film that defied me so long ago and see if, as an adult, I could at least finish it in one sitting.

I did but 10-year-old me wasn’t too off the mark on this one.

The Andromeda Strain, like its source material, is a fascinating examination of concepts, technology, and science fiction from a bygone era. It tells the tale of a team crafted of hand-picked scientists who are meant to tackle a secret and very expansive underground testing facility in the case that a virus or some sort of life form was brought back from outer space. Well, it happens. A small town in New Mexico is eradicated by an unknown contagion and they are sent to investigate the matter and address the potential worldwide threat.  Made only 2 years after the release of the novel, director Robert Wise and Universal Pictures must have loved what Crichton did with the story so much that they aimed to try and keep the tone and focus of the novel as much as they could as they translated it to the big screen. This is both a blessing and a curse for the final cinematic product. It allows the film to document the scientific concerns of the time period in a weirdly pristine snapshot of where things were, but it also creates a film that is bogged down by its attention to detail and focus on the science behind the thrills.

The dedication to the amount of detail and the real science behind the fiction astounds even to this day. While technology and science bound forward at an astounding rate, The Andromeda Strain attempts to showcase the cutting edge of what technology and science were in 1971 and it spends a substantial time dedicated to it. The film begins in a rather chilling way, as all of these scientists are practically forced with little explanation from their daily lives to investigate the event, and the initial portion of the film where two of them must gather evidence from the site of the decimated town feels a bit too real at times. This sequence is slathered in a sense of dread and atmospheric horror that sets up the scale of what these scientists are meant to deal with. It’s one of the better openings for a contagion outbreak for cinema just because of its sense of suffocating openness and how the scientists react to things. It’s nuanced and yet the scope of what is at stake is made apparent all the while it lays the groundwork for the mystery to be explored later. Naturally, it’s the best part of the film and the details make it more horrifying.

As The Andromeda Strain plays out, it only further and further distances itself from those real-world applications. There is certainly an intriguing mystery at the core of the plot, one that has some bold twists as it goes, but the film becomes so infatuated by its own realism to its world building that it fails to maximize on the thrills of its concept. Even by the end, where things, like they always do, go completely haywire, the film has trouble walking the audience through it because it has been so bogged down in the details that the broad character work and thrills of the concept have gone with it. This is the aim of the film certainly, but it’s one that undercuts the thrills. The character arcs feel flat unless they are tied to something scientific (seizures, the single-man protocol, etc.) and even though there are some fantastic performances on display the film struggles to maintain the humanity behind its science.

As always, this release is brimming with features courtesy of the Arrow Video team and their continued focus on delivering the best release of a film that they can for fans and new-finders alike. The new 4K scan of the original camera negative is sharp and clean (most certainly a massive upgrade from my memories of watching this film on VHS) and archived featurettes partnered with the new commentaries from film critics like Bryan Reesman and Kim Newman give the film a lot of context for the time period, its place in the apocalyptic genre, and more. I think Kim Newman’s recorded discussion is the highlight of the release for me even though the 4K restoration is rather breathtaking.

Despite my continued love for Crichton’s book, the film adaption of The Andromeda Strain remains a rather mixed cinematic experience. Although the design of the research base is sharp and leans towards science fiction in its own realistic way and Robert Wise does some interesting things with the way that the narrative plays out to help with the performances, the intention of the film ultimately bogs down its own thrills as a film. Too much of the second act is dedicated to procedural plotting and the finale lacks the impact because the characters are not given quite enough time to be the human part of the story. After such an astonishing opening of horrific imagery and realistic shock, it’s no wonder that 10-year-old me always struggled to make it through to the credits. For all of the interesting things that The Andromeda Strain does accomplish, it doesn’t necessarily pack on the thrills one might want. 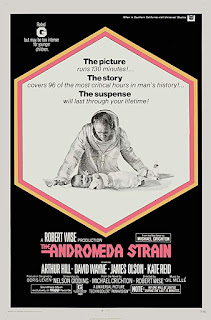