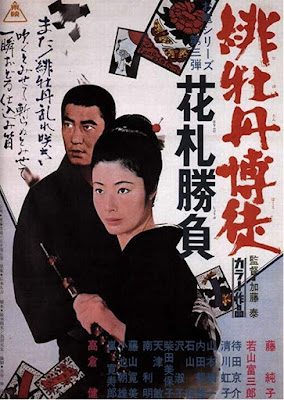 Although this was briefly discussed in my franchise reviews for both the incredible Zatoichi and fan favorite Sleepy Eyes of Death series, but the manner that the Japanese film industry would shotgun the release of entries into a popular series is something to be admired. The admiration extends to, but particularly includes, when it comes to maintaining a sense of quality while entries are both within the formula and giving each one its own identity. For the topic of this review, the next installment in the requested franchise coverage of the Red Peony Gambler called The Flower Cards Game is the third film of the series released within six months. Let that sink in for a second. Three films. Six months. Impressive? What’s even more impressive is the relatively minimal drop in quality over these three films. Although The Flower Cards Game is perhaps the weakest of the three, the film has its own unique tone that sets it aside from the previous two and still manages to maintain a strong narrative and solid execution.

One thing about the Red Peony Gambler series that has been an effective choice thus far is the use of setting. The film adheres to the “heroic” yakuza elements that were popular at the time in cinema, but its setting is one that blends the classic sword clashing chanbara-lite set pieces with more westernized elements of the late Meiji period that it takes place during. The Flower Cards Game specifically uses its time period to give it a unique visual style and add in some key thematic elements. As with the first two, our heroine Oryu is not afraid to wield a revolver which invokes fantastic reactions from the characters she points it towards, the villains are all dressed in suits compared to the more traditional garb adorned by the more heroic yakuza groups and there is a great use of the railroad as a meeting place and thematic representation. The film starts off by having Oryu, once again played with both kindness and intensity by Junko Fuji, saving a young blind girl who has wandered on the railroad tracks and it only keeps returning to trains for many of the key moments. Whether it’s the emotional scenes with this entry’s latest “love” interest that take place on a foot trail underneath the tracks (complete with steam kicking through the railroad ties above them for visually striking symbolism) or how two lovers on the lam from the villainous yakuza take refuge in a train station in hopes of escape, The Flower Cards Game uses the trains – and the transitional elements of the period – to really maximize some of its themes in great ways.

The rest of the film tends to follow along the Red Peony Gambler formula with rigorous intent hitting all of the elements that are now tropes for the series. A rival female gambler, the gray area where yakuza must operate as honorable and loyal even in the face of those who corrupt the institution, and a lone, wandering ‘do-gooder’ love interest that eventually helps out our heroine as she attempts to right wrongs and kicks a little ass along the way. Some of these elements do feel a tad forced into the narrative, including another glorified cameo by Tomisaburo Wakayama who pops up for a couple scenes as the returning character Kumasaka for a few laughs and one slick action moment, and many times the film struggles to refine its balance to get all of it in there. A subplot featuring the young blind girl and her family feels incredibly astute for Oryu’s character development but ends up being somewhat lost in the slew of various plots and characters.

Fortunately, the execution of The Flower Cards Game is well done enough that even when the film trips over its dense plotting and start-and-stop narrative it’s easy for an audience to reset themselves with what is happening and care. The performances are incredible and each character owns their space within the world being crafted by director Tai Kato. In particular, Ken Takakura takes what could have been a thin and throw away role and embeds some serious layers into it proving why he was so prolific in the 60s and 70s as an actor. However, Kato as a director ably knocks out each scene with visual flair and a sense of direction even if the script falters a bit.

Red Peony Gambler 3: The Flower Cards Game might technically be the weakest of the first three films thus far, but that’s hardly a knock on it as a whole. Director Tai Kato visually embellishes the film with great moments, maximizing the setting and themes, while the cast carry the characters through some of the rocky sections of an ambitiously flawed script. Even when The Flower Cards Game struggles, it manages to find something worth saying which is impressive. Bring on the fourth film…which, for the record, was only released 2 months after this one.