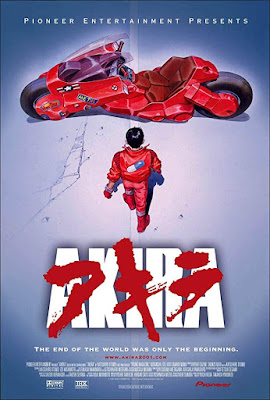 What does one even say about Akira, that could possibly replicate the feeling of watching it for the first time? I saw this movie, like many nerds in my age range, in my early teens. Fascinated by the idea of a cartoon that very loudly proclaimed that it was for adults. Lured by the twin sirens’ calls of violence and sex (because what else could “adult” possibly mean?), I don’t think any of us were quite prepared for what we were going to get. Violent, certainly, but adult in a way I certainly wasn’t expecting; philosophical, meaningful sci-fi, with a dash of body horror (a Japanese specialty), sharp political and social commentary, and stunning visuals, all while maintaining an undeniably punk sensibility. There is a reasonable contingent of people for whom Akira is the literal definition of cyberpunk. It was undeniably in the vanguard of the sub-genre, along with Blade Runner and books like Neuromancer and Snow Crash. It was defiantly not the hopeful retro-futurism of the 50s and 60s where technology exists solely for mankind’s benefit and our troubles came in the form of aliens, or worse, Russians. (pause for laughter) Instead, cyberpunk paints a future of giant mega-corporations and corrupt governments. Of technology run rampant and the devaluation of human life. It also deals with the next stage of humanity, be it psychics or transhumanistic technology. But more than anything, they tend to deal with trying to exist at the street level in such a horrorscape and looking for a little remaining humanity.

Released in Japan in 1988, Akira failed to light the box office on fire barely making its $9 million-dollar (American) budget back. It had some trouble getting a foothold into foreign markets as well, having, in the US at least, three separate distributors of two separate versions including a small theatrical run in Christmas 1989. It really found its life in the home video market (though, it was hard to find copies until the 1994 release) and subsequently, of course, became one of the most influential animated and sci-fi movies to ever exist. It's one of the most influential movies to ever exist, period. You can see it’s DNA in such disparate properties as The Matrix, Chronicle and Stranger Things, and yet nothing has ever quite replicated Akira’s distinct alchemy.

Set in 2019, some 31 years after an apocalyptic event in the middle of Tokyo (depicted in a fashion deeply evocative of a nuclear explosion, naturally) the film focuses on a young biker gang, (specifically on the leader Kaneda and his best friend and sad-sack Tetsuo), a paramilitary government outfit, their human experimentations, and on a guerrilla rebellion group trying to free these poor specimens. We open specifically on one of these rebels running through the streets of Tokyo escaping the mysterious military outfit. It goes very poorly for the rebel in question, who ends up being shot down mercilessly in the street. This cold open is a very effective table setting for several reasons. It immediately illustrates one of the primary conflicts in the film, while doing high-class subtle world-building. This is a world of neon and advertising, everywhere you look there are dazzling lights, but taking a move from Blade Runner, there’s also dirt and grime underneath it all, figuratively and literally. The masses are unaffected and unmoved by the man running with a strange-looking child, only noticing anything when blood starts flying. Even at that, the only people reacting with any level of appropriate horror are a little girl in a car who sees a dog killed in front of her, and the blue, white-haired child the rebel is carrying with him. This displays a callous world, at minimum, but also shows a little of the cyberpunk genre’s genius. By embracing Generation X’s apathy, they predicted our detachment from minute to minute reality. I honestly feel like if Otomo has been able to predict smartphones in 1982 (the original comic’s publish date), everyone would be on them, looking up only to take a video of the scene. Alas, after his rescuer is gunned down, the blue child screams in terror, and suddenly lights go out and a sign collapses as our first glimpse that this child with the appearance of an old man may not be quite what he seems.

This spins immediately into the aforementioned Tetsuo trying to start Kaneda’s custom motorcycle, again a rapid, effective and efficient storytelling move, showing both Tetsuo’s inferiority complex and desire to be respected. This moment also effectively introduces us to Kaneda, a headstrong, charismatic teen, who immediately taunts his friend. “Do you think you can handle it, Tetsuo?” he says, mockingly, as he takes control of his bike and revs it right up. A rival gang is riding tonight, and Kaneda and the boys aren’t having any of it. Now, I’m not planning to pause and analyze the whole film scene by scene, but this section is notable for a couple of other reasons. Specifically, although the cold open is gorgeously animated (the whole movie is animated on 1s, while most 2D animated projects are animated on 2s. A second of film is usually 24 frames per second, animating on 2s is a cost-saving measure meaning that they run every frame twice, 12 unique frames per second. Akira, to this day, is a motion marvel because of being animated at the full 24 unique frames a second)… and that’s just the motion, to say nothing of the artistry. The first time you see the gang’s motorcycles peel out, leaving a motion blur of the tail light, a subtle but breathtaking and memorable effect, you know you’re never going to see something quite like this ever again. After a brief, brutal fight the two storylines collide when Tetsuo almost runs the suddenly appearing escaped experimental child down but is psychically deflected causing him to wreck and be severely injured. Government creeps come to collect the blue kid, and take Tetsuo for good measure before sending the rest of the gang to a deeply overflowing police station, and ultimately back to their “last chance” trade school. From there, the shadowy scientists discover that Tetsuo may, in fact, be one of the most potentially powerful psychics they’ve ever encountered, certainly since Akira awakened… which is revealed to be the event that caused the city to be decimated 30 years ago. Kaneda ties up with the rebels and tries to save his friend, but now Tetsuo has seemingly infinite power, he’s only interested in proving that he’s a living god to be worshipped. This all comes to a head in a traumatizing event where Tetsuo can no longer control his power and becomes a giant, globulous technological, yet somehow also overly fleshy horror stopped only by… uhh… the blue psychic children resurrecting Akira to come take Tetsuo away so… (:cough:) he can become a literal god of a new universe?

And that is what I mean by adult in a way I wasn’t expecting. I was maybe 13 when I saw this movie. My capacity for analysis was still developing. I wasn’t ready to piece apart something this dense and meaningful. It really was a solid proof of a story that could be told no other way than animation but was absolutely not for children. There is heady stuff in between all the gory bits, like when rebel love interest Kei is trying to explain what Akira was. In the translation, the one I’m most familiar with, she says that what happened with Akira is like if an amoeba suddenly had the awareness of a human. It’s describing sudden evolution and asking us to make the same comparison. By extension that amoeba would appear a god to all of the other amoeba… and so too is Tetsuo considered. He is worshipped, and his arrogance is his own downfall… except that it isn’t. Because exploration of the social, political and scientific implications are definitely upfront, but the film avoids asking any moral questions, and this seems malicious. No one fits a traditional heroic role. Kaneda is a violent bike gang leader, who at the minimum hospitalized another gang leader in the course of the film, not to mention that although he’s shown in flashbacks to be Tetsuo’s protector and friend in the orphanage they grew up in, his constant mockery of Tetsuo is also part of what spurs Tetsuo’s actions. Tetsuo becomes literally mad with his power, and although not strictly fair to call him a villain, he’s certainly an antagonistic presence. Although the General, leader of the paramilitary organization, claims to have high ideals, he’s still complacent in horrid experimentation on children and active in covering it up, culminating in a military coup when his funding is threatened. Even the rebellion is ultimately shown to be a Magoo like organization, puppets on the string of a corrupt congressman, trying to make the military look bad. It is a film that asks you to care about all of these people anyway, and that is truly what makes this movie great. In a convoluted, almost impossible to parse setting and story, the movie has the guts to ask you to care about these people and the inherent character drama instead… because for everything I’ve described, what this movie is really about is the power dynamics between childhood friends, between government officials, and between people who all think they know what’s best. It’s a coming of age tale in a world that has given up and that is always going to be compelling cinema.

Though, on a pure genre level? Don’t let me undersell the giant techno-organic blob monster… the Japanese really are the masters of body horror, even in a science-fiction context. This film was wildly predictive, with the only real misses being our current lack of government psychics (that we know about) and the film not being technologically advanced enough… heck, it even famously called the 2020 Olympics being held in Tokyo. Beyond that, it is a genre masterpiece, a foreign film masterpiece and an unimpeachable animated classic.