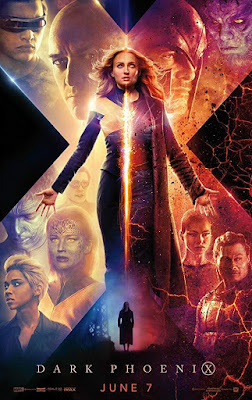 As a lifelong comic book nerd, and Marvel zombie specifically, I cannot understate the importance of the Dark Phoenix Saga to the landscape of my youth, especially the animated series’ take. Now, that doesn’t necessarily color my review the way you might think, as I’m also a deep believer in adaptation and some of the hidden beauty that can be drawn out of it. Say what you will about Constantine, for example, as a translation? Not even a little bit close. I mean… damn. They cast Keanu as a Brit. Again. At least he didn’t even try the accent this time, instead, they adapted it. And for my money, one of the finer action films of the aughts. So, what about Dark Phoenix, the deeply delayed swan song for Fox’s X-Men franchise? In a strange way, it serves as a great backdrop for a general post-mortem on the series as a whole. It’s extremely shaky with high highs, and low lows, and is better at the time than you remember it, albeit not necessarily good. There are less absolutely bad films in the franchise than you remember (X3, Origins: Wolverine, and Apocalypse being the only actually irredeemable ones).

The film opens having completely abdicated the previous film’s ending (if you forgot, Jean manifests what appears to be the Phoenix powers to destroy Apocalypse) and setting us in the early nineties, with the X-Men, and Professor X specifically, riding on a wave of public favor and fame. We’re going to circle back to this, as it actually is one of the better aspects of the film. They’re called in by the president on a rescue mission to space which leads to what is a really cool little action sequence involving extracting astronauts from an exploding ship. It goes well until it doesn’t, and young psychic Jean Grey appears doomed to perish in the vacuum of space, until luckily a mysterious energy she absorbed allows her to survive the event, and return more powerful than ever. In the comics, there are two major backstories to the Phoenix. One is the Ultimate universe take of having the Phoenix be inherent to Jean, and the more famous main universe take of it being a parasitic energy force. The writer of this film, and the previous live adaptation of the story X3, actually drew from both within the two attempts. This time he went the space route, and I do believe it was a good decision in theory. It opens up the movie to some cosmic weirdness, which over a decade into these movies might’ve been a very cool thing. We’ll never know because, in practice, saving astronauts in low earth orbit is the only real nod to that direction. Well, that and the aliens that were clearly Skrulls one draft earlier in the script who show up in the movie to very little net effect.

Jean becomes too powerful, and begins to feel betrayed, needled by the lead alien Vuk, and begins acting out. Ultimately, with one mutant off the rails, humanity decides mutants are too dangerous again, and the X-Men and Magneto, need to stop her to prove mutants and humanity can coexist. Again.

Leading off with what the film does well, firstly, the action and the effects work is legitimately good. You’ve never seen character floating and gesticulating like this before, which sounds more mocking than it is. Things that look good in comics don’t strictly translate well, but this collection of psychics and weather witches, human magnets and devilish teleporters, honestly? The powers have never looked better. The action scenes are well crafted and interesting, including the previously mentioned space rescue, an incredible battle on Magneto’s private island Geneosha, and the well-advertised prison train attack. Also, some of the cast is really on point, notably Sophie Turner as Jean who really is putting an effort in. Especially in direct contrast to Jennifer Lawrence’s sleepwalking, it’s interesting to see someone give their all to this franchise again. Also, really, this movie scratches on a subplot that the comics have only really reckoned with in the last decade… that being Xavier’s arrogance, and his endangerment of children for what he claims is the greater good, but may in fact only be his ego. It didn’t take this thread as far as it could’ve, but it is interesting. On a technical level, this movie is also really well shot, and really well assembled.

Now, I know that almost makes it sound good but make no mistake. It’s only with great effort and forgiveness that I can really say that much positive about Dark Phoenix. I’m not going to spend the rest of my time here tearing the film asunder, because honestly? Its box office take and the fact that it’ll end up a footnote in comic film history at best is punishment enough. But, as a case study of studio interference, this movie is telling. Half-formed ideas and plot lines, momentary cool ideas that aren’t thought out. Things you can tell were added or removed, well after the script phase. Actors who don’t care anymore, anchored by an actress who’s nakedly disdainful of the whole thing at this point… honestly, it’s a miracle this movie came together in any way, and that’s only because of direction. This is an example of what a passionate director can do when literally everything else is fighting him. It’s also a poor swan song for the franchise. Focusing mainly on characters introduced one movie ago, no Wolverine, or even reference thereof (although, obviously Logan is an unbelievably great film, and a fine bow for the character, I don’t begrudge this fact) and featuring ZERO through-line from either era of the series, this movie seems almost less a goodbye to the franchise and more like it was attempting to strike out an obviously ill-fated bold new direction for this iteration of the X-Men, and in that way it actually feels more like an unresolved cliffhanger than a capper to everything. But in a perverse way? That’s kind of perfect. Every movie in this series has had a quality of, to quote The Weekly Planet podcast, “You only really need to sort-of remember the last one” as a sequel, and that holds true for this. Who knows, maybe it’ll hold true going forward too.

Still… hold out until it hits your streaming service of choice, and even then, maybe keep it on in the background. If you only pay attention only during the big, bombastic parts you might accidentally find yourself having a pretty good time. Otherwise, you might as well hold out until Marvel reboots all of these characters in a couple of years, and just hold on to whatever positive memories you have of the franchise already, because I don’t believe this film will affect that one way or the other.