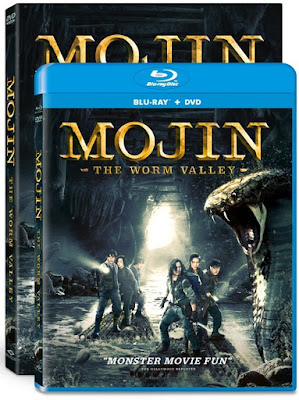 The first Mojin film was a surprise to me. It was fun, it was a dynamic mixture of genres, and the chemistry of its cast carried it through some of the rough patches of the script. The sequel, Mojin: The Worm Valley, was less than impressive. Although I will not spend nearly as much time digging into the film for this brief update (you can read my thoughts on it in full HERE) it should be mentioned that I went in with high hopes, only to find some disappointment in the resulting film.

Now that Mojin: The Worm Valley has dropped on Blu Ray; it was worth taking another gander at it. Fortunately, with tempered expectations, it’s easier to enjoy what The Worm Valley has to offer is popcorn fantasy-driven adventure entertainment. The blend of genres isn’t quite as smooth and re-casting the film strips it of much of its chemistry, but some of the unintentional humor makes for a fun watch that I was willing to give the benefit of the doubt on a second viewing. The Blu Ray release itself is a barebones one in terms of features. It just features the film itself, presented in Mandarin with English subtitles, and no special features. In a distribution world where foreign films rarely get US releases, thanks to a general audience that refuses to support films that are not in English, it’s nice for fans of the source material or those with an open mind to be able to add this to their collection. In particular, I'm a franchise guy and having this side by side with the original gives me joy, even fi the film isn't one of my favorites. The picture, sound, and execution of the film on Blu is worthy of seeing it on Blu instead of DVD (The Worm Valley is special effects and spectacle heavy – even if the CGI itself in the film is spotty) and for that, it gets a recommendation.

You can order your copy of Mojin: The Worm Valley at Amazon.