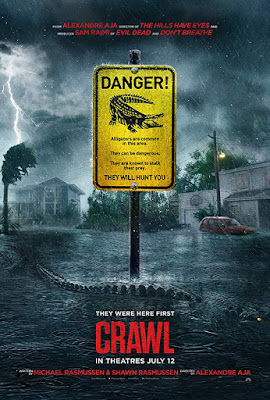 This may not be news to anyone, but Crawl is not a movie that exists in any kind of objective reality. It’s definitely within the director’s heightened sensibilities. Alexandre Aja exploded onto the scene in 2003 with the much, much-lauded High Tension, one of the movies that kicked off the French New Extreme Cinema movement, the same one that eventually brought us Inside, Martyrs, Frontier(s) and more. He has both helmed and produced a fair number of genre gems, if not a lot of classics (The Hills Have Eyes {2006}, Piranha 3D, Mirrors) and much in that same vein, we have Crawl, a serviceable, fun but ultimately forgettable creature feature.

The “creature feature,” such as it, traditionally has two distinct main arms. They’re both reasonably naked in their sci-fi roots, going back to the 50s and nuclear age cinema. There’s the “monster movie” where you have your Godzillas, your Cloverfields, and your The Mist, very exciting in their own right, with some dizzying highs. But they always have that element of fiction, they have what are definable only as monsters. The other branch has a few sub-genres of its own, but generally has real animals that are especially large or aggressive, your Anacondas, and Them! type movies, which tend to require a different kind of logical leap and inevitably require some sort of subplot to justify people being in the path of destruction. Anaconda isn’t just about a giant snake but is a jewel heist movie as well. This is the space that Crawl lives in, but in a really neat way where it slightly bucks its roots as well. The entire plot of this film is used to justify focusing entirely on the animal threat, which at the very least makes Crawl incredibly tight and focused.

Crawl starts simply enough with Maze Runner star Kaya Scodelario competing in a swim meet only to receive a call from her sister asking after their estranged father, played by an always nice to see Barry Pepper. He’s been out of contact for a few days and there is a major hurricane about to make landfall. Scodelario’s Haley naturally decides to drive over to check on him despite the mandatory evacuation order in his town. Bypassing a police checkpoint, she tracks her father to her childhood home and further, into the crawl space beneath, where the majority of the movie takes place. A couple of alligators have nested in along some ignored and forgotten storm drain, and the one in the crawlspace with them is making it impossible for Haley or her dad to leave.

That’s really it. If you’ve ever seen any movie like this before, the rest of this movie is going to feel like the same lyrics to a new tune, because like I said, this is firmly in the “real animal” camp creature features, but it plays by the “monster movie” rules. The gators are framed as nigh unstoppable, which is actually fair given the specific scenario, and they are horribly efficient killing machines which is actually true. If anything, this movie gives the prehistoric carnivores a few shortcomings to give the human characters a chance. If you’re the kind of person who has way too much access to Animal Planet, there are definitely things in the narrative that will give you pause… but I would say that if you’re looking for those kinds of flaws, this isn’t a genre for you anyway.

At a breezy 87 minutes, you wouldn’t really have time to think about that kind of stuff anyway and this film does deliver where you’d want it to. It has a slightly better body count than my synopsis implies and the effects and gore work is really top-notch. This is where Aja very much focuses and excels and always has. No one that has seen High Tension will ever forget its disregard for human skulls and the shape they’re supposed to have, his The Hills Have Eyes remake was only notable for its effects, and even Mirrors, which I’ve never been overly hot on personally, has unforgettable visual horror. Crawl tends towards realistic adjacent alligator violence, which in this case is incredibly effective in its own right.

There are very few negative comments I have about this movie, and all of them are characterization. In the sense that there is very little in the way of characters here. Considering the extremely small cast (even smaller if you count people we spend more than two minutes with) it’s disappointing to see Haley and Pepper’s Dave are little more than caricatures of an overbearing father/coach and an unmotivated, self-limiting sports star.  Rounded out by the “voice on a telephone” sister and the “aw shucks” moonstruck cop, there are no real people to root for, meaning that if you want to see this, you are paying to see animals goring people and literally nothing else. Depending on your personal taste you can call that a criticism.

With proper expectations in place, I want to be clear that this is an absolute gas to sit through especially with a vocal audience. If you have a bad time it’s only because you want this movie to be something it was never going to be nor is it even trying to be. Metaphorically, it treats the genre as something of a crocodilian in and of itself… proof that if you’re sharp and deadly enough, or at least good enough at what you do, there’s no real need to evolve beyond what works.