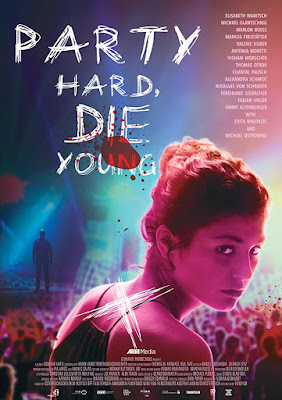 Slashers are probably the one genre that will never die. Once it was established, whether you want to argue that it was the late 70s or early 80s, the genre formula has been a cornerstone of the horror market. Even in the late 90s, when the horror genre started to waiver in the mainstream it was the slashers that took over. They are always there. As of lately, slashers are starting to garner steam again and so a part of me braces for the new wave. One of the first that intrigued me lately though was the Austrian film, Party Hard, Die Young which premiered on Shudder. Although the film has some issues foundationally, there is a lot of intriguing elements and style that should perk the interest of its viewers and fans of the genre.

What makes this slasher a somewhat interesting one is that, where most films in the genre attempt to modernize, this one fully embraces the current youth culture. It uses technology in a surprisingly effective way, if not occasionally gimmicky (it is a slasher,) and the setting of an island getaway party has no issues with saturating the film in current dance culture. The manner it’s shot is very modern, almost reflecting a kind if digital Refn vibe at times, and the film even occasionally goes into the thematic weight of modern issues for youth. In this manner, Party Hard, Die Young is a rather fascinating slasher. Like most modern slashers, there is an element of ‘meta’ to how it operates, but unlike others it does it in a way that makes sense for the culture and modernity and it doesn’t slide down into being an homage or spoof by taking it too far.

Unfortunately, a film can only get so far on detailing when the foundations are not as strong as they need to be to hold the entire structure. This is where, like most slashers, Party Hard, Die Young struggles. Although there are some intriguing plot elements, most of those are the devices it uses instead of the core pieces of narrative and character needed to carry the film. Most of the characters are rather unlikable, their plight is often predictable and flat, and even when the film starts to throw its own twists and turns – there is not a resonating solution that effectively ties it all together.

For all the interesting elements that it has to offer, Party Hard, Die Young doesn’t have the structure and foundational writing to carry the rest. With a smarter and more layered script, it might have been one of the more fascinating slashers of this new age. Unfortunately, it tends to fall a bit short. For those who have Shudder, it’s a decent way to burn a couple hours for the things it does do well.