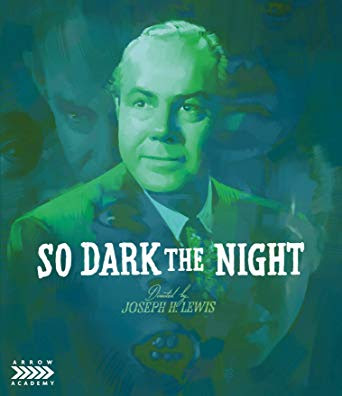 When it comes to digging into cinema, I tend to overlook too many films prior to the 1960s. Mostly because there is so much to dig into that sometimes its hard to know where to start. For that, I usually depend on outside sources to guide my purchases. One of them being collector’s distribution labels like Arrow Academy. When it was announced they would be releasing a Blu Ray for Lewis’ crime noir film So Dark the Night, I was ecstatic. Lewis had his fair share of impressive films under his belt and this film has garnered quite the cult status over the years as an overlooked gem of both his career and the genre. With that in mind, it’s somewhat perplexing that it took time for this film to build its momentum. It certainly deserves the serious praise it receives for its unique blend of style and detail that is built into what might have been a lesser B-grade film. It’s not a reach to understand why, at the time, the film may have been overlooked, but with the always teaching hindsight and context So Dark the Night is the kind of film that absolutely deserves a Blu Ray release of this stature.

Based on a story by Aubrey Wisberg, So Dark the Night starts off in such a way that it could go a thousand different directions. It introduces the audience to our chipper protagonist, Detective Cassin, as he is finally taking a long-deserved vacation from his time solving crimes in Paris. He is traveling to the country side and it’s there that he meets a beautiful young woman, Nanette, and quickly they fall and love and plan a marriage. This could be the opening of a romance, a comedy, a drama, or a variety of other films. However, it’s perhaps the perfect opening for a murder mystery film because it sets a hopeful and light-hearted tone that is easily deconstructed as the first murder arrives and the film spirals into the darker and darker territory. The plot itself is rather tricky because the third act takes a fairly punchy turn that leans heavily into ‘unbelievability,’ but the narrative is so full of nuance, style, and impressive qualities that it takes the various gimmicks and spins them into something grander. It’s weirdly artful in how it grabs onto its occasionally awkward moments and uses them to build its tone shifts and narrative slides. By the time the film starts revealing all of the pieces and picks up the pace into the third act, it has laid such a fantastic groundwork that it soars with ease right through any hiccups or gimmicks.

Most of So Dark the Night’s ability to maintain its narrative strengths lies in the execution of the film. Director Joseph H. Lewis has a knack for both quirky and subtle stylish elements that add layers to the film. Once all of the story is revealed, it’s easy to rewatch the film and look for all of the clues and tonal visual cues that Lewis embeds into it. Angles of cameras, the way shots are focused, and the use of windows and mirrors are all just some of the things that stood out on a second watch that adds an impeccable amount of detail to what could have been a second-rate film. Partner that sense of commitment to the idea with some fantastic performances, particularly in the great range and choices that Steven Geray as Cassin brings to the table, and So Dark the Night flies on its execution.

Again, as a reviewer, my overall understanding of the context of So Dark the Night is limited. It’s not like I am a rabid follower of Lewis’ career or even one that emphatically leaps into noir films. Fortunately, Arrow Academy knows that this is most likely the case for most of its viewers and the special features reflect that. Both the audio commentary by Glenn Kenny and Farran Smith Nehme and the new analysis by Imogen Sara Smith dig into the film’s many great layers and the context around it on why it has garnered its cult audience over time. Partner this with a great hi-def presentation and this release is prepped for both solidified fans and newbies like myself.

In terms of uncovered diamonds from the past, So Dark the Night is a shiny example of why it’s important to reach back and look at the films of the past – even those that might have been overlooked. The film is a layered treat, taking a gimmicky concept and executing it in such a thoughtful manner that it easily overcomes any of the flaws of its script. It’s a blessing that labels like Arrow Academy give life to films like this. Had they not released this film on a new Blu Ray, I certainly would not have thought to go hunting for it…and So Dark the Night deserves to be hunted down. 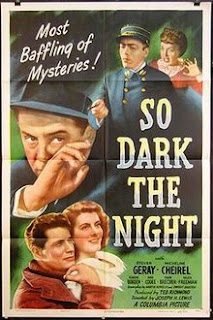