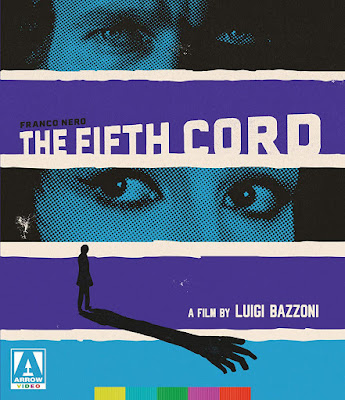 Arrow Video has become a destination home for classic giallo films to find a new life for collectors. This intention was a statement that the company made very early on when they started distributing titles. Whether it’s the wildly known classics, the schlocky exploitative films, or the artsy fringe films, when Arrow announces the release of a new giallo title, it’s reason enough to get excited. Most recently Arrow grabbed a handful of giallo fan favorites and their latest is the Luigi Bazzoni directed film, The Fifth Cord. Now, this is a film that I found to be, at least in the cinephile circles that I interact with, a very well-regarded film. Not one that is often brought up in conversation like some of the other classics, but one that certainly had earned the respect of the fans. The way that The Fifth Cord is regarded by fans might be the best way to describe the film too. Although the film has some fantastic elements to it, executed in a means that pulls the mundane murder mystery script well up into the upper echelons of the genre, it’s also a film that doesn’t necessarily make a huge splash in style that would garner the bigger audience of people referencing it. Still, even as the film plays things more grounded, it does it in such a fantastic manner that it’s a wonder it’s not referenced more as a cornerstone of the genre.

For The Fifth Cord, the most impressive aspect of the film is how director Bazzoni completely saves it from being a mediocre giallo experience. Based on a novel, the film plays its murder mystery about as straight forward as it can get when it comes to narrative and often doubles down on the tropes of the genre to get there. Our lead character, played with a steely eyed intensity that Franco Nero brings to damn near every role he does, is an alcoholic reporter on the outs with his employer and struggling to find a way to balance life, love, and work. A role that, in all fairness, is about as cliché as they get. He ends up stumbling into a murder mystery case where an unknown killer is knocking off people and leaving gloves at the scene, each with a missing finger as the body count grows. If you’ve seen a handful of murder thrillers or a couple of giallo films, then you can guess where it goes from there.

The film has a weird knack for trying to add depth to the proceedings by having each of the characters, of which there are quite a few with most being obvious red herrings or slaughter fodder, already related to one another prior to the narrative’s events. As the film proceeds through the investigation, there are a lot of soap opera style moments of “well, he’s my brother” or “they used to be together” character and plot reveals that ultimately seem forced or eye-rolling as they come. On paper, The Fifth Cord plays out more like a blue print to the usual mystery thriller with an ensemble cast of potential killers/victims. There isn’t a lot of natural progression to it and it lays out everything upfront. From a script standpoint, at least.

As the film continues on though, it works in some impressive and rather shocking ways. There are some phenomenal performances to be had here with Franco Nero leading the charge using his screen presence as an anchor for the film. The rest of the cast are as game as he is in selling the characters and story. In particular, both Silvia Monti and Ira von Furstenberg give fantastic performances that often steal the scenes they are in. They add so much depth to their characters when their roles could have been throw-away secondary performances. However, as mentioned above, it’s Bazzoni and his crew that truly lift the film well above its foundation. The film has phenomenal cinematography, useing its urban setting to its maximum benefit with tons of fantastic visual cues to the characters and where the plot’s emotional core is set. The way its edited, even when using tropes of the genre like a first person shot to kick off the film, keeps the pacing brisk and moving, only stopping to develop the tension needed for reveals and kill sequences. By the third act, The Fifth Cord hits such a wild and frantic tone, doubled down by the pressures from the police and his mental state on Nero’s character, that its final chase sequence had me completely on the edge of my seat and holding my breath to see if our anti-heroic reporter was going to be able to unmask the killer and bring them to justice. Even when the script bogs the film down, Bazzoni and the cast bring so much energy and effort to the screen that it uplifts the entire experience into A-grade giallo levels.

To add to that experience, once again Arrow Video is bringing their own A-grade material to this latest release. As always with their releases, I have added the entire list of features down below, but there are a few notable ones. Firstly, the new 2K restoration is gorgeous. It truly highlights the cinematography of the film and that is one of the best parts of watching it. Secondly, while the new release features a ton of new analysis material from critics and interviews with various people involved with the film, the interview with Michael Mackenzie might be a great one for those first starting to dig into the features as he gives a very honest critique and historical context to the film that adds a lot of insight to the hows, whys, and whats of the film that either work or don’t work.

After having seen The Fifth Cord, it’s no wonder that Arrow wanted to release it. It’s truly a gem of the genre. Even when its problematic script is floundering to find the balance of its melodrama and realism, the execution of it is impressive enough that it’s easy to disregard many of its obvious flaws. Whether it’s the fantastic cast, the stunning cinematography, or the great use of visuals to maintain a sense of purpose and emotional depth, The Fifth Cord is a fantastic fine. It’s not as splashy as many of the major films of the genre might be with their colors, sounds, and lavish gimmicks, but The Fifth Cord represents some of the solid artistic elements that the genre should be praised for as it garners more and more clout with time. This release is an easy recommendation for both genre and more traditionalist cinephile fans. 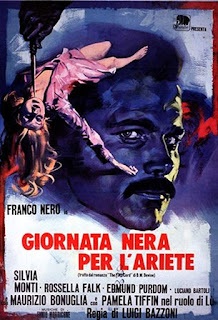