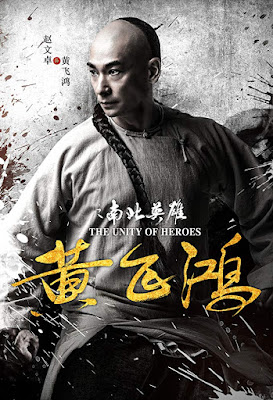 If I were being truthful to myself, I would say I was anxious going into The Unity of Heroes. The film felt like it was heavily reliant on nostalgia for fans of the Wong Fei-Hung films from the 90s, in particular the films of the Once Upon a Time in China series, and I wasn’t sure that was going to be enough to carry the film. Thus, I was cautious going in and just went in to have a fun time. This is how I would suggest anyone watching the film go into it. If you do, then you could very well find quite a bit of enjoyment. The Unity of Heroes is hardly a great film, but it’s one that wears its influences proudly on its sleeves and wants its audience to have a good time with the film more than anything. While it’s not a film full of substance or the layered thoughtfulness that made the Once Upon a Time in China films iconic, it does entertain and have fun with its story and characters. That’s worth something, right?

To say that the film tries to use its nostalgia as the main reason for its audience to enjoy what it has would be an understatement. Just the fact that they figured out how to bring Vincent Zhao back to the role of Chinese folk hero Wong Fei-Hung was indication that they were hoping to replicate some of that feeling. What solidifies that intent is that The Unity of Heroes goes to replicate the Once series right down to its structure, characters, and tone. Whether it’s the romantic subplot with 13th Aunt, the humorous students, or the conspiracy plot that involved medicine, foreign powers, and a rival kung fu teacher, this film attempts to recreate all of it.

Granted, The Unity of Heroes doesn’t find the balance that it might have with a more discerning script and perhaps a more talented directorial hand at pacing the tonal shifts. Where the Once series could find this thoughtful outlook about a progressive China in a growing world that needed to find balance between evolution and identity, this film plays things more straightforward. The foreigner is a bad guy, it’s obvious, there isn’t the tension of the romance, and Wong Fei-Hung is going to kick 100% ass when needed. In a way, it plays out more like a knock off of its inspiration than homage as it runs through the motions and pins in all of the pieces one would want into its run time.

The trick is that the film, somehow, pulls it off. Maybe it’s because I am a sucker for knock off cinema, but I had a blast with The Unity of Heroes. It pulls out this ridiculous plot element of a super opium drug that gives its users super-solider like strength and power, the film punches out an action sequence damn near every 15 minutes, and – wildly enough – actually shies away from too much CGI and green screen. That’s right, this film focuses on classic 90s kung fu choreography with gloriously cheesy wirework. The cast seems game to embrace the ridiculousness of it all with Vincent Zhao doing his heart of gold, fists of a God scheme and the rest of the cast balancing out the over zealous melodrama or the goofier comedic moments. It might not be great film making, but it is honest film making.

In the end, as problematic or thin as the plotting and characters might be, The Unity of Heroes is an enjoyable film. It mixes its 90s kung fu core with a bit of silly knock off elements and it aims to deliver laughs and classic action. It relies very heavily on its audiences having a bit of nostalgia love for its style and approach, but it never really tries to hide it. Go in with tempered expectations and just enjoy The Unity of Heroes for what it is – throwback 90s kung fu fun.

*Note: By the time this film arrives in the US, being released via Well Go USA later this year, the second film is already filmed and ready for release in China. Stay tuned for more Wong Fei-Hung action!