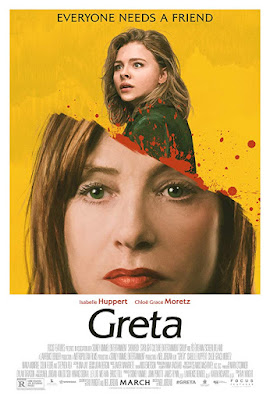 Greta is the kind of film that sneaks up on a person. Most mid-level films have been relegated to straight to streaming in a lot of ways, but this one certainly had just enough star power in to it garner that wide theatrical release. Still, it’s not like director Neil Jordan is a household name at this point and so it’s not that shocking to see that even with its wide release it struggled to find its footing and audience. Particularly when the film itself is a substantially mixed experience. However, despite its own issues, Greta is the kind of film that has a weird ace in its sleeve for the third act and it saves the film from being a wholly forgettable and formulaic experience.

Weirdly enough, Greta is the kind of film that feels like it should be 25 years old. I say this because, well, the seems firmly rooted in that 90s female lead thriller territory. Particularly in the first two acts. Granted, Jordan and company certainly sell the experience with solid enough execution. If anything, the film is just fine through the first two acts. Chloë Grace Moretz handles her own in the lead role, finding a solid balance between frustrating, paranoia, and anger, and she works well with an icon like Isabelle Huppert who single handedly elevates most of the tension and embraces her role with a strangely exciting vigor. Still, the film seemingly waddles through the motions for the majority of the film, stumbling through some very convenient plot pieces and eye-rolling character decisions. If it wasn’t for Maika Monroe, who steals every scene she is in as the roommate, Greta would have been a slog to get through.

Then, Greta does something weirdly effective and completely unexpected. For the first two acts, the film plays everything dead serious and very grounded in tone. By the third act though, it injects a very healthy dose of dark humor and horror. It shakes off the weight of being a traditional thriller and starts to move in a much more interesting direction. In fact, Greta starts leaning so heavily in that direction that it becomes both very unnerving and effectively funny in the strange choices it makes. It works so well for me that as the credits began to roll, the question evolved from “what is the point of this film” to “why the hell wasn’t it embracing this strange, quirky, and disturbingly humorous tone from minute one?”

Even with a third act that saves the film from being a hum-drum and borderline boring experience, Greta struggles to get the cohesion and thoughtfulness that would be required for it to truly utilize the talents that are behind the film. The cast is great, seriously though I kind of wish Monroe was in every film, and in moments the film works as a punchy thriller. The third act carries the film a long way once it starts to feel like it has a personality, but it’s a bit too little and a bit too late. It gets a slight recommendation, mostly to see what the film could have been if it had just done the dark humor thing for the entire run time, but it’s not the film that I would suggest running out to see.