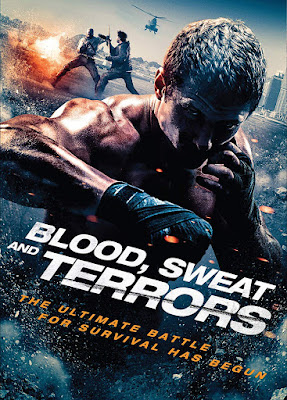 In terms of action sub-genres, Blood, Sweat and Terrors features a wide variety of material across the board – so there’s a little something for everyone. Whether it’s more thriller and intrigue, neo noir, comedic, horror, or martial arts, this film has it. Often times it’s a mixture – including a segment called Get Some that is a horror comedy with action centered around a reality TV show post-zombie outbreak, for example, but there are certainly some portions that stick to their guns as action cinema. In particular, there are a few segments that truly soar as short action films. One part named Express Delivery is a martial art highlight reel with charm that pours out of damn near every frame while a segment called Olga is a revenge film done almost perfectly with some crisp and violent hand to hand combat and a great leaping narrative. It’s in these moments that one can see why this compilation was put together to showcase this kind of talent. Some of the others are flawed, if not ambitious, like Fetch which has a lot of great gags and fun self-referential moments despite being in a gimmicky and uneven film from 2007 (which is directed by the always underrated Daniel Bernhardt and starring Leitch from John Wick, Atomic Blonde, and Deadpool 2 fame.) Overall, though there are some great segments included that piles on the entertainment even when flawed.

Granted, as mentioned above, one of the bigger issues with Blood, Sweat and Terrors is that the film is not nearly as cohesive as it might have been. Often times with anthologies there is a theme or a threading that works its way through the stories and how they relate, but in the case of this one it simply feels like a collection of films thrown together versus one that is a bit more thoughtful in how the films are presented or ordered. The silly graphics that give the audience the title and director after each segment with a burst of CGI fire seem like late minute additions and the overall tone of how the segments are ordered seems more sporadic than strategic. More or less though, with some of the quality of segments, this is a smaller issue.

Blood, Sweat and Terrors is not going to be a film for many of the more casual film fans as it’s not the greatest anthology to hit the shelves. However, combine the fact that it is one of the few action anthologies out there with some of the great talent and segments included, then it is a collection that is very worthy to be hunted down by action connoisseurs. While it’s not perfect, with a few segments that do feel a tad underwhelming, the parts that do hit – hit very hard and come off as blissfully entertaining and worthy of the purchase. Blood, Sweat and Terrors is flawed, but it’s also energetically enjoyable. It still gets a hefty recommendation.