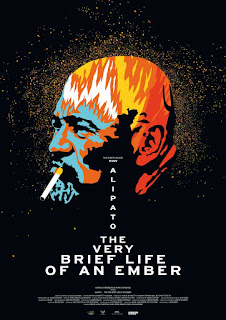 Set in Mondomanila, a fictionalized take on the Philippines' very own Manila, a more seedier, even lower side of the underbelly of the country, a place that is linked in other works of Khavn's, as I know he shot a film named after this semi-fictional place. We meet a group of kids, that range from toddler to preteen and from the darkest walks of life. Their names are as varied and bizarre, from 'Pubic' to 'J-Blo', to name merely a couple. Their appearances are just as unique, with one kid sporting a giant afro, to another stark naked save a boxing helmet encased by a motorcycle helmet on his head, and a gun in his hand, and even a little toddler, packed with a handgun as well. They remind me of a darker version of the Lost Boys.


The plot is very straightforward, maybe the only basic element of the film, being that this group of outsider kids run around and rob stores, but when they are eventually in realization that they need to go bigger, they attempt to rob a bank. The narrative is told in a handful of chapters, that progress through a few decades, and quite literally tell you what's about to unfold.

Many films have pushed boundaries, but Alipato knows none and goes as far as it can in every deprived and taboo direction, merely lifting the largest middle finger to the world that cinema has ever seen as it gleefully does so. We see things ranging from a character dead atop a burger caricature while sexual activities had been performed at some point i  time shown to us from the viewpoint of a wandering goat that is passing by to a kid urinating into a giant bowl of noodles that the main group was about to eat. I could list a pile of shocking things, but that may deter certain viewers and I may have already done so by this point, unfortunately.


While I don't think that every scene or sequence quite works as it should, as some are far better than others, I respect that Khavn never once compromises his vision and always goes for it, no matter what. There are a handful of moments that blew my mind and one particular stop-motion segment that I think is hands down one of the greatest sequences in all of cinema. Even if you aren't a fan of the film overall, there is no denying the craftsmanship of that scene.

In the end, I prefer the other aforementioned film of Khavn's that I have watched, but I admire this one more and think ultimately that there is much more to be had here. An unflinching look at one of the darkest corners of the world. Places that most filmmakers wouldn't even dream of going to. Absolute insanity from the first frame to last. For those who can handle it, I dare you to experience Alipato: The Very Brief Life of an Ember. There is nothing out there like it.