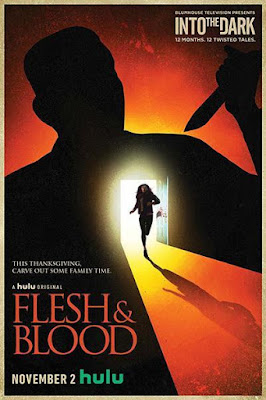 Flesh & Blood features enough solid material to appease horror and thriller fans. The contained house setting benefits the atmosphere and tone, the narrative does set up all of the twists and turns as it goes into the latter half of the film, and it features fantastic performances from the small and intimate cast. In particular, both Diana Silvers and Dermot Mulroney get to really dive into the character arcs of the daughter and father duo with some great nuance. Mulroney tends to steal the show with his performance as he gets to play coy with the audience as the young daughter goes through a roller coaster of emotions when she starts to believe that he might be a killer. Her performance gets a lot more range, but his gets to be a lot more fun.  There are some great set pieces in the film too, particularly in the third act, once the plot is laid bare and the film doesn’t need to worry about its mysteries any more and sort of spirals into a ‘home invasion’ kind of concept.  In these regards, Flesh & Blood is entertaining and worth the watch for horror fans.

The issues that arise for the film though come back to the fact that it wants to play its story out with one foot in the high entertainment world of horror and one foot in the more nuanced world of a psychological thriller. This creates its own tension that the film attempts to juggle. It’s a juggling act that prevents it from reaching any great heights on either side. It also creates a lot of voids in the narrative that can cause issues in the momentum and rifts in character logic. Not to spoil any specific scenes, but there are a couple of moments in the second act that work on their own, but in the overall narrative they leave the audience wondering just why they exist. One can see where this film could have exceled on side or the other, the cat and mouse chase of the third act is prime horror and the nuance of paranoia and terror of the first act is great psychological thrills, but the second act sees the film stumble at blending them.

In the end, Flesh & Blood is still an entertaining film with plenty of solid moments to appease horror fans. It is a step down in energy and the punchy execution of Into the Dark’s first episode, The Body, but in some ways that was to be expected. If anything, this second film showcases just how diverse that Into the Dark can be as a series and that provides a lot of excitement for fans. In that way, despite being a disappointing and uneven film overall, Flesh & Blood provides some great insight.