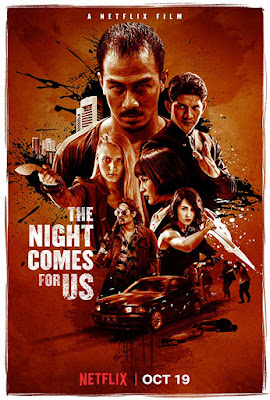 When it comes to narrative or plot, The Night Comes for Us is hardly anything revolutionary. Joe Taslim plays a Triad ‘enforcer,’ renowned as being one of the Six Seas. When he has a change of heart, during the obliteration of small village to save a young girl, he sets hell upon himself and those he knows leading to a confrontation with an old friend. This is a plot that’s been done before and it is built on a ton of action film tropes. Fans of the genre will immediately latch on to a lot of key moments, character interactions, and plot developments and, if there is one thing about the film that bogs it down, this ends up making it quite predictable. Director Timo loves to play with some of the reveals of the plot as surprises, when nothing about the film is all that surprising in the end and that can be problematic if one is looking for a film that tries to be a bit more organic or refreshing in its approach to its writing.

The rest of the film, however, is a fucking blast. Even with its predicable plot and occasionally artistic narrative that tries to balance some quiet moments within the bombardment of action, The Night Comes for Us is so entertaining and blissfully aware of it that it makes up for so many of its flaws as a storytelling vehicle. The characters are broad stroke representations of brotherhood or the usual gamut of villains, but they are built to collide with one another in the most grandiose of ways. The film does just enough with the world building, including the levels of the Six Seas and the occasional use of flash back to flesh things out, that it intrigues without losing the ignited rocket fuel that represents its pacing. Once again, Timo Tjahjanto crafts dynamic visuals and slathers the film in a palpable atmosphere that’s thick enough to smell, taste, and feel that makes every sequence, even when most of them take place in a variety of generic locations, feel like they belong in the world. It’s in these moments that one can see the nuance of the style and focus on tone that makes the film succeed.

In the end, with a cast that includes an all-star Indonesian action extravaganza, it’s the action sequences that truly highlight and uplift the film above and beyond. What makes it so remarkable is that the action can be so balletic in its choreography and so viscerally brutal in its execution. Timo’s previous film, Headshot, was incredibly violent, but The Night Comes for Us completely overshadows it in the sheer amount of insane violence that is perpetrated onscreen. This is a film where anything and everything becomes a weapon, not just the more than capable cast, and whether it’s the bombastic gun battles or the Hong Kong inspired use of the setting as weapons – including but not limited to pool table pockets full of billiards or the broken bones of a butcher’s back room, this film will use it to create dynamic action. Naturally, this is topped off by the long-awaited duel between Joe Taslim and Iko Uwais (who gives a great performance as the villain in this one) that will have martial arts fans clamoring for more. This one-on-one fight is hands down one of the greatest action sequences this year.

The Night Comes for Us might have a flawed concept, that occasionally under utilizes its themes to lift it above the standard and predictable narrative, but the film is just so goddamn entertaining and relentless in its action and gimmicky characters that one cannot help but be completely absorbed into its stylish world. The action is crisp, dynamic, and jaw-droppingly brutal, the characters are fun caricatures, and the style of the direction from Timo is prime material. The Night Comes for Us is not perfect, but it’s perfectly crafted to be as effective as it can be for what it is.

Who can deny that?