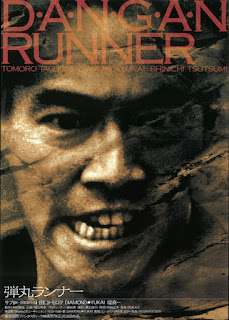 
While it doesn't always work, particularly in the brief dramatic moments, Dangan Runner shines with its comedic gags and timing. The editing and montages throughout can be quite experimental at times, calling to mind the works of Shinya Tsukamoto, at times even matching his manic energy.

All three of our leads do a fine job, each portraying men on the bottom fringes of society in different aspects and giving them just enough levity to make them somehow likable as they run amok through the streets of Japan.


While I wish it would've flown off the hinges a little more by its end, I think Dangan Runner is a fine debut of an underrated director, whose works demands further exposure. It's the perfect mix of schlock, sleaze, and gun wielding laughter that will please most genre fans.

The New Third Window Films blu-ray coming in November of 2018 includes a limited edition slipcase with exclusive artwork, a video essay on V-Cinema by Japanese Film Expert Tom Mes, and a brand new interview with SABU, giving great insights and an overview of his career as a director. This is easily one of the best blu-ray releases of the year.
Posted by Josh Parmer
Email ThisBlogThis!Share to TwitterShare to FacebookShare to Pinterest
Labels: Action / Adventure, Comedy, Diamond Yukai, Sabu, Shinichi Tsutsumi, Suspense / Thriller, Third Window Films, Tomorowo Taguchi